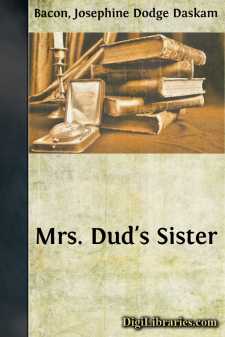 They were having tea on the terrace. As Varian strolled up to the group he wished that Hunter could see the picture they made—Hunter, who had not been in America for thirty years, and who had been so honestly surprised when Varian had spoken of Mrs. Dud's pretty maids—she always had pretty ones, even to the cook's third assistant.

"Maids? Maids? It used to be 'help,'" he had protested. "You don't mean to say they have waitresses in Binghamville now?"

Varian had despaired of giving him any idea.

"Come over and see Mrs. Dud," he had urged, "and do her portrait. We've moved on since you left us, you know. She's a wonder—she really is. When you remember how she used to carry her father's dinner to the store Saturday afternoons—"

"And now I suppose she sports real Mechlin on her cap," assented Hunter, anxious to show how perfectly he caught the situation.

Varian had roared helplessly. "Cap? Cap!" he had moaned finally. "Oh, my sainted granny! Cap! My poor fellow, your view of Binghamville must be like the old maps of Africa in the green geography, that said 'desert' and 'interior' and 'savage tribes' from time to time. I should like awfully to see Mrs. Dud in a cap."

"But, dear me! she might very well wear one, I should think," he had murmured defensively. "I don't wish to be invidious, but surely Lizzie must be—let's see; 'eighty, 'ninety—why, she must be between forty-five and fifty now."

Varian had waved his hand dramatically. "Nobody considers Mrs. Dud and time in the same breath. If you could see her in her golf rig! Or on a horse! She even sheds a lustre on the rest of us. I forget my rheumatism!"

But Hunter, retreating behind his determination to avoid a second seasickness—it might have been sincere; nobody ever knew—had stayed in Florence, and Varian had been obliged to come without him to the house-party.

On a straw cushion, a cup in her strong white hand, a bunch of adoring young girls at her feet, sat Mrs. Dud. Rosy and firm-cheeked, crisp in stiff white duck, deliriously contrasted with her fluffy Parisian parasol, she scorned the softening ruffles of her presumable contemporaries; her delicately squared chin, for the most part held high, showed a straight white collar under a throat only a little fuller than the girlish ones all around her.

Old Dudley himself strolled about the group, gossiping here and there with some pretty woman, sending the grave servants from one to another with some particularly desirable sandwich, "rubbing it in," as he said to the men who had failed to touch his score on the links, tantalizingly uncertain as to which one of the young women he would invite to lead the cotillon with him at the club dance that week: none of the young men could take his place at that, as they themselves enviously admitted.

What a well-matched couple it was! What a lot they got out of life! Varian walked quietly by the group, to enjoy better the pretty, modish picture they made. Their quick chatter, their bursts of laughter, the sweet faint odor of the tea, the gay dresses and light flannels, with the quiet, sombrely attired servants to add tone, all gave him, fresh from Hunter's quick sense of the effective, an appreciation that gained force from his separateness; he walked farther away to get a different point of view.

He was out of any path now, and suddenly, hardly beyond reach of their voices, he found himself in a part of the grounds he had never approached before....