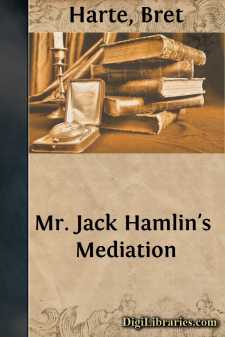 At nightfall it began to rain. The wind arose too, and also began to buffet a small, struggling, nondescript figure, creeping along the trail over the rocky upland meadow towards Rylands's rancho. At times its head was hidden in what appeared to be wings thrown upward from its shoulders; at times its broad-brimmed hat was cocked jauntily on one side, and again the brim was fixed over the face like a visor. At one moment a drifting misshapen mass of drapery, at the next its vague garments, beaten back hard against the figure, revealed outlines far too delicate for that rude enwrapping. For it was Mrs. Rylands herself, in her husband's hat and her "hired man's" old blue army overcoat, returning from the post-office two miles away. The wind continued its aggression until she reached the front door of her newly plastered farmhouse, and then a heavier blast shook the pines above the low-pitched, shingled roof, and sent a shower of arrowy drops after her like a Parthian parting, as she entered. She threw aside the overcoat and hat, and somewhat inconsistently entered the sitting-room, to walk to the window and look back upon the path she had just traversed. The wind and the rain swept down a slope, half meadow, half clearing,—a mile away,—to a fringe of sycamores. A mile further lay the stage road, where, three hours later, her husband would alight on his return from Sacramento. It would be a long wet walk for Joshua Rylands, as their only horse had been borrowed by a neighbor.

In that fading light Mrs. Rylands's oval cheek was shining still from the raindrops, but there was something in the expression of her worried face that might have as readily suggested tears. She was strikingly handsome, yet quite as incongruous an ornament to her surroundings as she had been to her outer wrappings a moment ago. Even the clothes she now stood in hinted an inadaptibility to the weather—the house—the position she occupied in it. A figured silk dress, spoiled rather than overworn, was still of a quality inconsistent with her evident habits, and the lace-edged petticoat that peeped beneath it was draggled with mud and unaccustomed usage. Her glossy black hair, which had been tossed into curls in some foreign fashion, was now wind-blown into a burlesque of it. This incongruity was still further accented by the appearance of the room she had entered. It was coldly and severely furnished, making the chill of the yet damp white plaster unpleasantly obvious. A black harmonium organ stood in one corner, set out with black and white hymn-books; a trestle-like table contained a large Bible; half a dozen black, horsehair-cushioned chairs stood, geometrically distant, against the walls, from which hung four engravings of "Paradise Lost" in black mourning frames; some dried ferns and autumn leaves stood in a vase on the mantelpiece, as if the chill of the room had prematurely blighted them. The coldly glittering grate below was also decorated with withered sprays, as if an attempt had been made to burn them, but was frustrated through damp....