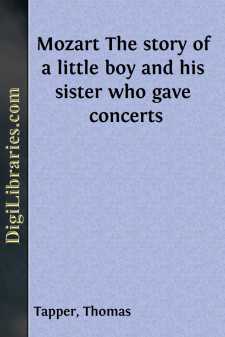 The composer whom we call WOLFGANG AMADEUS MOZART was called Wolferl when he was a little boy.

He had a sister, MARIA ANNA, who was called NANNERL.

Nannerl was five years older than her brother. She had lessons from her father on a kind of piano called a harpsichord.

Here is a picture of one.

When Wolferl was three years old he used to listen to Nannerl's playing. He always watched and listened when Papa Mozart gave her a harpsichord lesson.

Little as he was, he would often go to the harpsichord and try to pick out tunes with his chubby fingers. His father noticed that Wolferl could remember quite a little of the music that Nannerl was practising.

And here is a picture of Wolferl trying to reach the keys so as to play the melody of his sister's lesson.

THE INFANT MOZART AT THE PIANO.

When Wolferl was four years old he began to take lessons.

While he practised no one ever spoke to him because he was so serious about it. If other children came to play with Nannerl he would make music for their games and marching; playing in strict time all the while.

Here is Nannerl's picture when she grew up to be a young lady.

Father Mozart loved both of his children deeply and often played with them. The violin was the instrument he liked best and little Mozart had daily lessons in his home. Here we see him playing while his sister sings.

In this picture we see Papa Mozart, who was a very fine player on the violin. Wolferl and Nannerl are playing the piano.

MOZART PLAYING WITH HIS FATHER AND SISTER.

When Wolferl was nearly six his father took him and Nannerl on a concert tour. Everybody wanted to hear them play and they gave many concerts.

Wolferl spent all his boyhood with his music. He went to many places to play, even as far from Salzburg, in Austria (where he was born), as to Paris and London.

Everywhere he went people were happy to see him and his sister and to hear them play. And they, too, were happy to play because they loved the music so much.

When they reached Vienna they played for the Emperor and Empress.

When Wolferl was presented to the Empress he jumped up into her lap and kissed her.

Wolferl was always busy composing music. But he played games and had a good time just like any other boy. When he was busy with his music, however, he never let his thoughts go to anything else.

But we must not go too fast, for we want to see how Wolferl is growing up.

Here is his picture when he was five years old and beside it another when he was eight years old. Do you see his wig and sword?

MOZART AT FIVE. MOZART AT EIGHT.

Everybody in Paris wanted to hear Wolferl play when they knew that he had come, so they asked him to read at sight; to play the bass part to a melody and to accompany a song without seeing the music.

People also took great delight in asking him to play on the harpsichord with a cloth stretched over the keyboard so that he could not see the keys.

They all went to London to play for the King....