More Translations from the Chinese 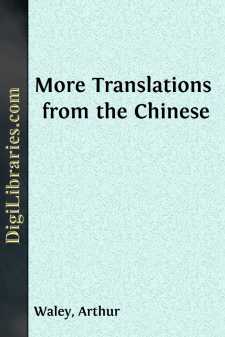 This book is not intended to be representative of Chinese literature as a whole. I have chosen and arranged chronologically various pieces which interested me and which it seemed possible to translate adequately.

An account of the history and technique of Chinese poetry will be found in the introduction to my last book. Learned reviewers must not suppose that I have failed to appreciate the poets whom I do not translate. Nor can they complain that the more famous of these poets are inaccessible to European readers; about a hundred of Li Po’s poems have been translated, and thirty or forty of Tu Fu’s. I have, as before, given half my space to Po Chü-i, of whose poems I had selected for translation a much larger number than I have succeeded in rendering. I will give literal versions of two rejected ones:

While many of the pieces in “170 Chinese Poems” aimed at literary form in English, others did no more than give the sense of the Chinese in almost as crude a way as the two examples above. It was probably because of this inconsistency that no reviewer treated the book as an experiment in English unrhymed verse, though this was the aspect of it which most interested the writer.

In the present work I have aimed more consistently at poetic form, but have included on account of their biographical interest two or three rather unsuccessful versions of late poems by Po Chü-i.

For leave to reprint I am indebted to the editors of the English Review, Nation, New Statesman, Bulletin of School of Oriental Studies, and Reconstruction.

When Ch‘ü Yüan had been exiled from the Court for nine years, he became so despondent that he feared his soul would part from his body and he would die. It was then that he made the poem called “The Great Summons,” calling upon his soul not to leave him.

Green Spring receivethThe vacant earth;The white sun shineth;Spring wind provokethTo burst and burgeonEach sprout and flower.In those dark caves where Winter lurkethHide not, my Soul!O Soul come back again! O, do not stray! O Soul come back again and go not east or west, or north or south!For to the East a mighty water drowneth Earth’s other shore;Tossed on its waves and heaving with its tidesThe hornless Dragon of the Ocean rideth:Clouds gather low and fogs enfold the seaAnd gleaming ice drifts past.O Soul go not to the East,To the silent Valley of Sunrise! O Soul go not to the SouthWhere mile on mile the earth is burnt awayAnd poisonous serpents slither through the flames;Where on precipitous paths or in deep woodsTigers and leopards prowl,And water-scorpions wait;Where the king-python rears his giant head....
Show more
Show less