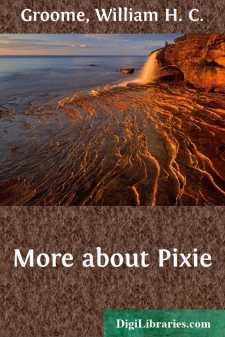 The night nurse was dusting the room preparatory to going off duty for the day, and Sylvia was lying on her water-bed watching her movements with gloomy, disapproving eyes. For four long weeks—ever since the crisis had passed and she had come back to consciousness of her surroundings—she had watched the same proceeding morning after morning, until its details had become almost unbearably wearisome to her weak nerves.

First of all came Mary to sweep the floor—she went down on her knees, and swept up the dust with a small hand-brush, and however carefully she might begin, it was quite, quite certain that she would end by knocking up against the legs of the bed, and giving a jar and shock to the quivering inmate. Then she would depart, and nurse would take the ornaments off the mantelpiece, flick the duster over them, and put them back in the wrong places.

It did not seem of the least importance to her whether the blue vase stood in the centre or at the side, but Sylvia had a dozen reasons for wishing to have it in exactly one position and no other. She liked to see its graceful shape and rich colouring reflected in the mirror which hung immediately beneath the gas-bracket; if it were moved to the left it spoiled her view of a tiny water-colour painting which was one of her greatest treasures, while if it stood on the right it ousted the greatest treasure of all—the silver-framed portrait of the dear, darling, most beloved of fathers, who was afar off at the other side of the world, tea-planting in Ceylon.

Sylvia was too weak to protest, but she burrowed down among the clothes, and moped to herself in good old typhoid fashion. “Wish she would leave it alone! Wish people wouldn’t bother about the room. Don’t care if it is dusty! Wish I could be left in peace. Don’t believe I shall ever be better. Don’t believe my temperature ever will go down. Don’t care if it doesn’t! Wish father were home to come and talk, and cheer me up. Boo-hoo-hoo!”

The tears trickled down and splashed saltly against her lips, but she kept her sobs under control, for crying was a luxury which was forbidden by the authorities, and could only be indulged in by stealth.

The night nurse thought that the patient had fallen asleep, but when she went off duty, and her successor arrived, she cast a suspicious glance at the humped-up bedclothes, and turned them down with a gentle but determined hand.

“Crying again?” she cried. “Oh, come now, I can’t allow that! What are you crying about on such a lovely, bright morning, when you have had such a good night’s rest?”

“I had a horrid night. I couldn’t sleep a bit. I feel so mum-mum-miserable!” wailed the patient dolefully. “I’m so tired of being in bed.”

“You won’t have very much longer of it now. Your temperature is lower than it has ever been this morning. You ought to be in good spirits instead of crying in this silly way. Come now, cheer up! I am not going to allow such a doleful face.”