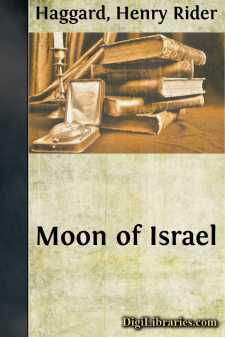 This book suggests that the real Pharaoh of the Exodus was not Meneptah or Merenptah, son of Rameses the Great, but the mysterious usurper, Amenmeses, who for a year or two occupied the throne between the death of Meneptah and the accession of his son the heir-apparent, the gentle-natured Seti II.

Of the fate of Amenmeses history says nothing; he may well have perished in the Red Sea or rather the Sea of Reeds, for, unlike those of Meneptah and the second Seti, his body has not been found.

Students of Egyptology will be familiar with the writings of the scribe and novelist Anana, or Ana as he is here called.

It was the Author's hope to dedicate this story to Sir Gaston Maspero, K.C.M.G., Director of the Cairo Museum, with whom on several occasions he discussed its plot some years ago. Unhappily, however, weighed down by one of the bereavements of the war, this great Egyptologist died in the interval between its writing and its publication. Still, since Lady Maspero informs him that such is the wish of his family, he adds the dedication which he had proposed to offer to that eminent writer and student of the past.

When you assured me as to a romance of mine concerning ancient Egypt, that it was so full of the "inner spirit of the old Egyptians" that, after kindred efforts of your own and a lifetime of study, you could not conceive how it had been possible for it to spring from the brain of a modern man, I thought your verdict, coming from such a judge, one of the greatest compliments that ever I received. It is this opinion of yours indeed which induces me to offer you another tale of a like complexion. Especially am I encouraged thereto by a certain conversation between us in Cairo, while we gazed at the majestic countenance of the Pharaoh Meneptah, for then it was, as you may recall, that you said you thought the plan of this book probable and that it commended itself to your knowledge of those dim days.

With gratitude for your help and kindness and the sincerest homage to your accumulated lore concerning the most mysterious of all the perished peoples of the earth,

Believe me to remain

MOON OF ISRAEL CHAPTER I SCRIBE ANA COMES TO TANIS

This is the story of me, Ana the scribe, son of Meri, and of certain of the days that I have spent upon the earth. These things I have written down now that I am very old in the reign of Rameses, the third of that name, when Egypt is once more strong and as she was in the ancient time. I have written them before death takes me, that they may be buried with me in death, for as my spirit shall arise in the hour of resurrection, so also these my words may arise in their hour and tell to those who shall come after me upon the earth of what I knew upon the earth. Let it be as Those in heaven shall decree. At least I write and what I write is true.

I tell of his divine Majesty whom I loved and love as my own soul, Seti Meneptah the second, whose day of birth was my day of birth, the Hawk who has flown to heaven before me; of Userti the Proud, his queen, she who afterwards married his divine Majesty, Saptah, whom I saw laid in her tomb at Thebes. I tell of Merapi, who was named Moon of Israel, and of her people, the Hebrews, who dwelt for long in Egypt and departed thence, having paid us back in loss and shame for all the good and ill we gave them....