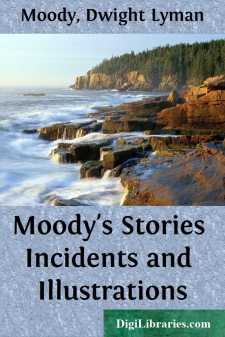 When Mr. Sankey and I were in London a lady who attended our meetings was brought into the house in her carriage, being unable to walk. At first she was very skeptical; but one day she said to her servant:

"Take me into the inquiry room."

After I had talked with her a good while about her soul she said:

"But you will go back to America, and it will be all over."

I couldn't make her believe it. I don't know how many times I talked with her. At last I used the fable of the pendulum in the clock. The pendulum figured up the thousands of times it would have to tick, and got discouraged, and was going to give up. Then it thought, "It is only a tick at a time," and went on. So it is in the Christian life—only one step at a time. That helped this lady very much. She began to see that if she could trust in God for a supply of grace for only one day, she could go right on in the same way from day to day. As soon as she saw this, she came out quite decided. But she never could get done talking about that pendulum. The servants called her Lady Pendulum. She had a pendulum put up in her room to remind her of the illustration, and when I went away from London she gave me a clock—I've got it in my house still.

Dr. Andrew Bonar once said that, although it was a mystery to him how sin should have come into the world, it was still a greater mystery how God should have come here to bear the penalty of it Himself.

I remember being in a city where I noticed that the people resorted to a favorite well in one of the parks. I said to a man one day:

"Does the well never run dry?"

The man was drinking of the water out of the well; and as he stopped drinking, he smacked his lips, and said:

"They have never been able to pump it dry yet. They tried it a few years ago. They put the fire-engines to work, and tried all they could to pump the well dry; but they found there was a river flowing right under the city."

Thank God, the well of salvation can never run dry either!

He Trusted his Father

A party of gentlemen in Scotland wanted to get some eggs from a nest on the side of a precipice, and they tried to persuade a poor boy that lived near to go over and get them, saying they would hold him by a rope. They offered him a good deal of money; but they were strangers to him, and he would not go. They told him they would see that no accident happened to him; they would hold the rope.

At last he said: "I will go if my father will hold the rope."

He trusted his father.

A man will not trust strangers. I want to get acquainted with a man before I put my confidence in him. I have known God for forty years, and I have more confidence in Him now than I ever had before; it increases every year.

When France and England were at war once a French vessel had gone off on a long whaling voyage. When they came back, the crew were short of water, and being near an English port, they wanted to get water; but they were afraid that they would be taken prisoners if they went into that port....