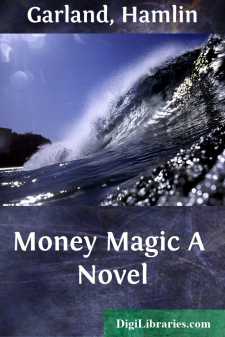 THE CLERK OF THE GOLDEN EAGLE

Sibley Junction is in the sub-tropic zone of Colorado. It lies in a hot, dry, but immensely productive valley at an altitude of some four thousand feet above the sea, a village laced with irrigating ditches, shaded by big cotton-wood-trees, and beat upon by a genial, generous-minded sun. The boarders at the Golden Eagle Hotel can sit on the front stoop and see the snow-filled ravines of the mountains to the south, and almost hear the thunder crashing round old Uncompahgre, even when the broad leaves above their heads are pulseless and the heat of the mid-day light is a cataract of molten metal.

It is, as I have said, a productive land, for upon this ashen, cactus-spotted, repellent flat men have directed the cool, sweet water of the upper world, and wherever this life-giving fluid touches the soil grass and grain spring up like magic.

For all its wild and beautiful setting, Sibley is now a town of farmers and traders rather than of miners. The wagons entering the gates are laden with wheat and melons and peaches rather than with ore and giant-powder, and the hotels are frequented by ranchers of prosaic aspect, by passing drummers for shoes and sugars, and by the barbers and clerks of near-by shops. It is, in fact, a bit of slow-going village life dropped between the diabolism of Cripple Creek and the decay of Creede.

Nevertheless, now and then a genuine trailer from the heights, or cow-man from the mesas, does drop into town on some transient business and, with his peculiar speech and stride, remind the lazy town-loafers of the vigorous life going on far above them. Such types nearly always put up at the Eagle Hotel, which was a boarding-house advanced to the sidewalk of the main street and possessing a register.

At the time of this story trade was good at the Eagle for two reasons. Mrs. Gilman was both landlady and cook, and an excellent cook, and, what was still more alluring, Bertha, her pretty daughter, was day-clerk and general manager. Customers of the drummer type are very loyal to their hotels, and amazingly sensitive to female charm—therefore Bertha, who would have been called an attractive girl anywhere, was widely known and tenderly recalled by every brakeman on the line. She was tall and straight, with brown hair and big, candid, serious eyes—wistful when in repose, boyishly frank and direct as she stood behind her desk attending to business, or smiling as she sped her parting guests at the door.

"I know Bertie ought to be in school," Mrs. Gilman said one day to a sympathetic guest. "But what can I do? We got to live. I didn't come out here for my health, but goodness knows I never expected to slave away in a hot kitchen in this way. If Mr. Gilman had lived—"

It was her habit to leave her demonstrations—even her sentences—unfinished, a peculiarity arising partly from her need of hastening to prevent some pot from boiling over and partly from her failing powers. She had been handsome once—but the heat of the stove, the steam of the washtub, and the vexation and prolonged effort of her daily life had warped and faded and battered her into a pathetic wreck of womanhood....