Monarch, the Big Bear of Tallac 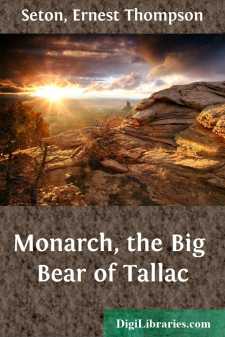 I. THE TWO SPRINGS

High above Sierra's peaks stands grim Mount Tallac. Ten thousand feet above the sea it rears its head to gaze out north to that vast and wonderful turquoise that men call Lake Tahoe, and northwest, across a piney sea, to its great white sister, Shasta of the Snows; wonderful colors and things on every side, mast-like pine trees strung with jewelry, streams that a Buddhist would have made sacred, hills that an Arab would have held holy. But Lan Kellyan's keen gray eyes were turned to other things. The childish delight in life and light for their own sakes had faded, as they must in one whose training had been to make him hold them very cheap. Why value grass? All the world is grass. Why value air, when it is everywhere in measureless immensity? Why value life, when, all alive, his living came from taking life? His senses were alert, not for the rainbow hills and the gem-bright lakes, but for the living things that he must meet in daily rivalry, each staking on the game, his life. Hunter was written on his leathern garb, on his tawny face, on his lithe and sinewy form, and shone in his clear gray eye.

The cloven granite peak might pass unmarked, but a faint dimple in the sod did not. Calipers could not have told that it was widened at one end, but the hunter's eye did, and following, he looked for and found another, then smaller signs, and he knew that a big Bear and two little ones had passed and were still close at hand, for the grass in the marks was yet unbending. Lan rode his hunting pony on the trail. It sniffed and stepped nervously, for it knew as well as the rider that a Grizzly family was near. They came to a terrace leading to an open upland. Twenty feet on this side of it Lan slipped to the ground, dropped the reins, the well-known sign to the pony that he must stand at that spot, then cocked his rifle and climbed the bank. At the top he went with yet greater caution, and soon saw an old Grizzly with her two cubs. She was lying down some fifty yards away and afforded a poor shot; he fired at what seemed to be the shoulder. The aim was true, but the Bear got only a flesh-wound. She sprang to her feet and made for the place where the puff of smoke arose. The Bear had fifty yards to cover, the man had fifteen, but she came racing down the bank before he was fairly on the horse, and for a hundred yards the pony bounded in terror while the old Grizzly ran almost alongside, striking at him and missing by a scant hair's-breadth each time. But the Grizzly rarely keeps up its great speed for many yards. The horse got under full headway, and the shaggy mother, falling behind, gave up the chase and returned to her cubs.

"THE PONY BOUNDED IN TERROR WHILE THE GRIZZLY RAN ALMOST ALONGSIDE"

She was a singular old Bear. She had a large patch of white on her breast, white cheeks and shoulders, graded into the brown elsewhere, and Lan from this remembered her afterward as the "Pinto." She had almost caught him that time, and the hunter was ready to believe that he owed her a grudge.

A week later his chance came. As he passed along the rim of Pocket Gulch, a small, deep valley with sides of sheer rock in most places, he saw afar the old Pinto Bear with her two little brown cubs. She was crossing from one side where the wall was low to another part easy to climb. As she stopped to drink at the clear stream Lan fired with his rifle. At the shot Pinto turned on her cubs, and slapping first one, then the other, she chased them up a tree. Now a second shot struck her and she charged fiercely up the sloping part of the wall, clearly recognizing the whole situation and determined to destroy that hunter. She came snorting up the steep acclivity wounded and raging, only to receive a final shot in the brain that sent her rolling back to lie dead at the bottom of Pocket Gulch. The hunter, after waiting to make sure, moved to the edge and fired another shot into the old one's body; then reloading, he went cautiously down to the tree where still were the cubs. They gazed at him with wild seriousness as he approached them, and when he began to climb they scrambled up higher. Here one set up a plaintive whining and the other an angry growling, their outcries increasing as he came nearer.

He took out a stout cord, and noosing them in turn, dragged them to the ground. One rushed at him and, though little bigger than a cat, would certainly have done him serious injury had he not held it off with a forked stick.

After tying them to a strong but swaying branch he went to his horse, got a grain-bag, dropped them into that, and rode with them to his shanty. He fastened each with a collar and chain to a post, up which they climbed, and sitting on the top they whined and growled, according to their humor. For the first few days there was danger of the cubs strangling themselves or of starving to death, but at length they were beguiled into drinking some milk most ungently procured from a range cow that was lassoed for the purpose. In another week they seemed somewhat reconciled to their lot, and thenceforth plainly notified their captor whenever they wanted food or water.

And thus the two small rills ran on, a little farther down the mountain now, deeper and wider, keeping near each other; leaping bars, rejoicing in the sunlight, held for a while by some trivial dam, but overleaping that and running on with pools and deeps that harbor bigger things.

II. THE SPRINGS AND THE MINER'S DAM

Jack and Jill, the hunter named the cubs; and Jill, the little fury, did nothing to change his early impression of her bad temper. When at food-time the man came she would get as far as possible up the post and growl, or else sit in sulky fear and silence; Jack would scramble down and strain at his chain to meet his captor, whining softly, and gobbling his food at once with the greatest of gusto and the worst of manners....