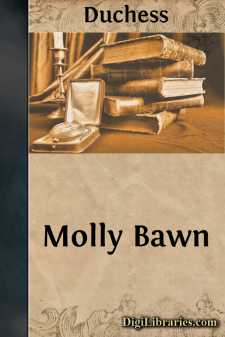 "Positively he is coming!" says Mr. Massereene, with an air of the most profound astonishment.

"Who?" asks Molly, curiously, pausing with her toast in mid-air (they are at breakfast), and with her lovely eyes twice their usual goodly size. Her lips, too, are apart; but whether in anticipation of the news or of the toast, it would be difficult to decide. "Is any one coming here?"

"Even here. This letter"—regarding, with a stricken conscience, the elegant scrawl in his hand—"is from Tedcastle George Luttrell (he is evidently proud of his name), declaring himself not only ready but fatally willing to accept my invitation to spend a month with me."

"A month!" says Molly, amazed. "And you never said a word about it, John."

"A month!" says Letitia, dismayed. "What on earth, John, is any one to do with any one for a month down here?"

"I wish I knew," replies Mr. Massereene, getting more and more stricken as he notices his wife's dejection, and gazing at Molly as though for inspiration. "What evil genius possessed me that I didn't say a fortnight? But, to tell you the honest truth, Letty, it never occurred to me that he might come."

"Then why did you ask him?" says Letitia, as sharply as is possible for her. "When writing, you might have anticipated so much: people generally do."

"Do they?" says Mr. Massereene, with an irrepressible glance at Molly. "Then you must only put me down as an exception to the general rule. I thought it only civil to ask him, but I certainly never believed he would be rash enough to go in for voluntary exile. I should have remembered how unthinking he always was."

"But who is he?" asks Molly, impatiently, full of keen and pleasurable excitement. "I die of vulgar curiosity. What is he like? Is he young, handsome? Oh, John, do say he is young and good-looking."

"He was at school with me."

"Does that groan proceed from a conviction that I am in the last stage of decay?" demands Mr. Massereene. "Anything so rude as you, Molly, has not as yet been rivaled. However, I am at a disadvantage: so I forgive, and will proceed. Though at school with me, he is at least nine years my junior, and can't be more than twenty-seven."

"Ah!" says Molly. To an Irish girl alone is given the power to express these two exclamations with proper effect.

"He is a hussar, of a good family, sufficiently good looks, and, I think, no fortune," says Mr. Massereene, as though reading from a doubtful guide-book.

"How terrific!" sighs Letitia. "Fancy a hussar finding amusement in lambs, and cows, and fat pigs, and green fields!"

"'Green fields and pastures new,'" quotes Mr. Massereene. "He will have them in abundance. He ought to be happy, as they say there is a charm in variety."

"Perhaps he will find some amusement in me," suggests Molly, modestly. "Can it be possible that he is really coming? Oh, the glory of having a young man to talk to, and that young man a soldier! Letitia," to her sister-in-law, "I warn you it will be no use for you to look shocked, because I have finally made up my mind to flirt every day, and all day long, with Tedcastle George Luttrell."