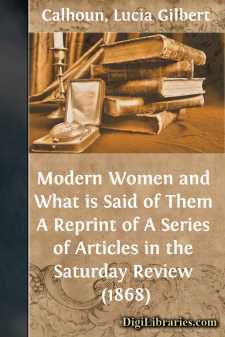 The "Woman Question" will not be put to silence. It demands an answer of Western legislators. It besets college faculties. It pursues veteran politicians to the fastnesses of so-called National Conventions. Under the sacred sounding-boards of New England pulpits has its voice been heard, and its unexpected ally, the London Saturday Review, introduces it to the good society of English drawing-rooms. That this introduction comes in the form of diatribe and denunciation is a matter of the least moment. Judgment will finally rest, not on the conclusions of the special pleader, but on the strength of the case of the accused.

Something, clearly, is wrong with fashionable women. They accept the thinnest gilt, the poorest pinchbeck, for gold. They care more for a dreary social pre-eminence than for home and children. They find in extravagance of living and a vulgar costliness of dress their only expression of a vague desire for the beauty and elegance of life. Is it, therefore, to be inferred that the race of noble women is dying out? St. Paul was hardly less severe than the London Saturday, if less explicit, in his condemnation of the fashionable women of his day, yet we look upon that day as heroic. Certainly neither London nor New York can rival the luxury of a rich Roman matron, yet it was not the luxury of her women which destroyed the empire, and Brutus's Portia was quite as truly a representative woman as the superb Messalina. John Knox thought that things were as bad as they could possibly be when he thundered at vice in high places; and if there had been a John Knox in the court of Charles the Second, he would have sighed for a return of the innocent days of his great-grandfather.

On the whole, that hope which springs eternal suggests that the fashionable women of the reign of Victoria, and of our seventeenth President, are not essentially more discouraging than all the generations of the thoughtless fair who danced idly down forgotten pasts. Nay, we may even hope that they are better. If they will not actually think, yet the fatal contagion of the newspaper and the modern novel communicates to them an intellectual irritation which might almost stand for a mental process. If they have not ideas, they have notions of things, and however inexact and absurd these may be, they are better than emptiness.

"Worse, decidedly worse," says our implacable critic; "when women were content with looking pretty before marriage, and with good housekeeping after, they were uninteresting certainly, but they were respectable. Now they dabble in all things; are weakly æsthetic, weakly scientific, weakly controversial, and wholly prosy, and contemptible." Dabbling is pitiful, certainly, and weakness has few allies, but let us do justice even to the weak dabblers. Æsthetic, or scientific, or controversial training has but recently been made possible to women. Their previous range of study had been very narrow. It is not strange that the least attainments should seem to them very profound and satisfactory, and the most manifest deductions pass for original conclusions....