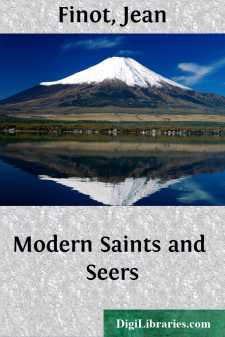 "Listen within yourselves, and gaze into the infinity of Space and Time. There resounds the song of the Stars, the voice of Numbers, the harmony of the Spheres."—HERMES TRISMEGISTUS.

In these days the phenomenon of religion, which we believed to have receded into the background of human life, is reappearing among us, more vigorous than ever. The four years' desolation into which the world was plunged has rendered the attraction of "the beyond" irresistible, and man turns towards it with passionate curiosity and undisguised longing. The millions of dead who have vanished from mortal sight seem to be drawing the present towards the unsounded deeps of the future. In many cases their loss has taken all joy and colour from the lives of those who survive them, and tear-stained faces are instinctively turned towards the portals of the Great Mystery.

Occultism is triumphant. In its many different forms it now emerges from obscurity and neglect. Its promises excite our deepest thoughts and wishes. Eagerly we examine the strength of the bridge that it has built between this world and the next; and though we may see our hopes slip down between the crevices, though we may find those who have been disappointed in a more despairing state than before—what matter? We still owe thanks to occultism for some cherished moments of illusion.

The number of its followers increases steadily, for never before has man experienced so ardent a desire for direct contact with the Unknowable. Science will have to reckon with this movement which is carrying away even her own high-priests. She will have to widen her frontiers to include the phenomena that she formerly contemned.

The supernatural world, with its abnormal manifestations, fascinates modern humanity. The idea of death becomes more and more familiar. We even demand, as Renan happily expressed it, to know the truth which shall enable us not to fear, but almost to love, death: and an irresistible force urges us to explore the depths of subconsciousness, whence, it is claimed, may spring the desired renewal and intensification of man's spiritual life.

But why is it that we do not return to the old-established religions? It is because, alas, the Great Agony through which the world has passed has not dealt kindly with any form of established faith. Dogmatic theology, which admits and exalts the direct interference of the divinity in our affairs, has received some serious wounds. The useless and unjustifiable sacrifice of so many innocent lives, of women, of old men, of children, left us deeply perplexed. We could not grasp the reason for so much suffering. Never, at any period in the past, have the enemies of humanity and of God so blasphemed against the eternal principles of the universe—yet how was it that the authors of such crimes went unpunished?

Agonising doubts seized upon many faithful hearts, and amid all the misery with which our planet was filled we seemed to distinguish a creeping paralysis of the established faiths. Just at the time when we most had need of religion, it seemed to weaken and vanish from our sight, though we knew that human life, when not enriched and ennobled by spiritual forces, sinks into abysmal depths, and that even any diminution in the strength of these forces is fatally injurious to our most sacred and essential interests....