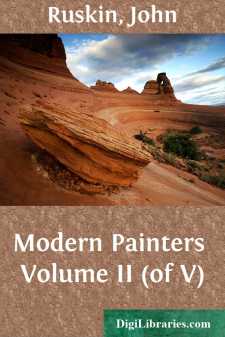 CHAPTER I. OF THE RANK AND RELATIONS OF THE THEORETIC FACULTY.

Although the hasty execution and controversial tone of the former portions of this essay have been subjects of frequent regret to the writer, yet the one was in some measure excusable § 1. With what care the subject is to be approached.in a work referred to a temporary end, and the other unavoidable, in one directed against particular opinions. Nor are either of any necessary detriment to its availableness as a foundation for more careful and extended survey, in so far as its province was confined to the assertion of obvious and visible facts, the verification of which could in no degree be dependent either on the care with which they might be classed, or the temper in which they were regarded. Not so with respect to the investigation now before us, which, being not of things outward, and sensibly demonstrable, but of the value and meaning of mental impressions, must be entered upon with a modesty and cautiousness proportioned to the difficulty of determining the likeness, or community of such impressions, as they are received by different men, and with seriousness proportioned to the importance of rightly regarding those faculties over which we have moral power, and therefore in relation to which we assuredly incur a moral responsibility. There is not the thing left to the choice of man to do or not to do, but there is some sort of degree of duty involved in his determination; and by how much the more, therefore, our subject becomes embarrassed by the cross influences of variously admitted passion, administered discipline, or encouraged affection, upon the minds of men, by so much the more it becomes matter of weight and import to observe by what laws we should be guided, and of what responsibilities regardful, in all that we admit, administer, or encourage.

Nor indeed have I ever, even in the preceding sections, spoken with levity, though sometimes perhaps with rashness. I have never treated the subject as other than demanding heedful § 2. And of what importance considered.and serious examination, and taking high place among those which justify as they reward our utmost ardor and earnestness of pursuit. That it justifies them must be my present task to prove; that it demands them has never been doubted. Art, properly so called, is no recreation; it cannot be learned at spare moments, nor pursued when we have nothing better to do. It is no handiwork for drawing-room tables; no relief of the ennui of boudoirs; it must be understood and undertaken seriously or not at all. To advance it men's lives must be given, and to receive it their hearts. "Le peintre Rubens s'amuse à être ambassadeur," said one with whom, but for his own words, we might have thought that effort had been absorbed in power, and the labor of his art in its felicity.—"E faticoso lo studio della pittura, et sempre si fa il mare maggiore," said he, who of all men was least likely to have left us discouraging report of anything that majesty of intellect could grasp, or continuity of labor overcome. But that this labor, the necessity of which in all ages has been most frankly admitted by the greatest men, is justifiable in a moral point of view, that it is not the pouring out of men's lives upon the ground, that it has functions of usefulness addressed to the weightiest of human interests, and that the objects of it have calls upon us which it is inconsistent alike with our human dignity and our heavenward duty to disobey—has never been boldly asserted nor fairly admitted; least of all is it likely to be so in these days of dispatch and display, where vanity, on the one side, supplies the place of that love of art which is the only effective patronage, and on the other, of the incorruptible and earnest pride which no applause, no reprobation, can blind to its shortcomings nor beguile of its hope....