Modern Industrialism and the Negroes of the United States The American Negro Academy, Occasional Papers No. 12 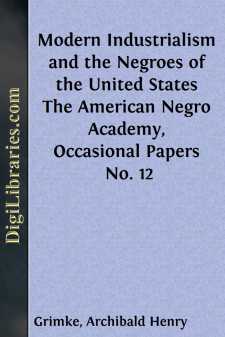 What is that tremendous system of production, organization and struggle known as modern industrialism going to do with the Negroes of the United States? Passing into its huge hopper and between its upper and nether millstones, are they to come out grist for the nation, or mere chaff, doomed like the Indian to ultimate extinction in the raging fires of racial and industrial rivalry and progress? Sphinx’s riddle, say you, which yet awaits its Oedipus? Perhaps, though an examination of the past may show us that the riddle is not awaiting its Oedipus so much as his answer, which he has been writing slowly, word by word, and inexorably, in the social evolution of the republic for a century, and is writing still. If we succeed in reading aright what has already been inscribed by that iron pen, may we not guess the remainder, and so catch from afar the fateful answer? Possibly. Then let us try.

With unequaled sagacity the founders of the American Republic reared, without prototype or precedent, its solid walls and stately columns on the broad basis of human equality, and of certain inalienable rights, such as life, liberty and the pursuit of happiness, to which they declared all men entitled. Deep they sunk their foundation piles on the consent of the governed, and committed fearlessly, sublimely, the new state to the people. But there was an exception, and on this exception hangs our tale, and turns the dark drama of our national history.

Those founders had to deal with many novel and perplexing problems of construction, but none seemed so difficult to handle as were those which grew out of the presence of African slavery, as an industrial system, in several of the States. At the threshold of national existence these men were constrained by circumstances to make an exception to the primary principles which they had placed at the bottom of their untried and bold experiment in popular government. This sacrifice of fundamental truth carried along with it one of the sternest retributions of history. For it involved the admission on equal footing into the Union of a fundamental error in ethics and economics, with which our new industrial democracy was forced presently to engage in deadly strife for existence and survivorship.

The American fathers were, undoubtedly, aware of the misfortune of admitting under one general government, and on terms of equality, two mutually invasive and destructive social ideas and their corresponding systems of labor. But they were baffled at the time by what appeared to be a political necessity, and so met the grand emergency of the age by concession and a spirit of conciliation. Many of them, indeed, desired on economic as well as on moral grounds the abolition of slavery, and probably felt the more disposed to compromise with the evil in the general confidence with which they regarded its early and ultimate extinction.

This humane expectation of the young republic failed of realization, owing primarily and chiefly, I think, to the potent influence upon the institution of slavery of certain labor-saving inventions and their industrial application in England and America during the last quarter of the eighteenth century. These epoch-making inventions were the spinning jenny of Hargreaves, the spinning machine of Arkwright and the mule of Crompton, in combination with the steam engine, which turned, says John Richard Green, “Lancastershire into a hive of industry.” And last, though not least in its direct and indirect effects on slavery, was the cotton gin of Eli Whitney, which formed the other half—the other hand, so to speak—of the spinning frame. The new power loom in England created a growing demand for raw cotton, which the American contrivance enabled the Southern planter to meet with an increased supply of the same. Together these inventions operated naturally to enhance the value of slave labor and slave land, and therein conduced powerfully to the slave revival in the United States, which followed their introduction into the economic world....