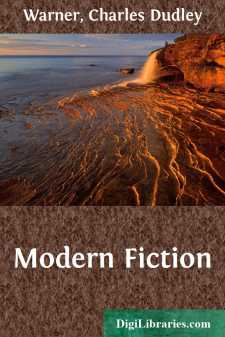 One of the worst characteristics of modern fiction is its so-called truth to nature. For fiction is an art, as painting is, as sculpture is, as acting is. A photograph of a natural object is not art; nor is the plaster cast of a man's face, nor is the bare setting on the stage of an actual occurrence. Art requires an idealization of nature. The amateur, though she may be a lady, who attempts to represent upon the stage the lady of the drawing-room, usually fails to convey to the spectators the impression of a lady. She lacks the art by which the trained actress, who may not be a lady, succeeds. The actual transfer to the stage of the drawing-room and its occupants, with the behavior common in well-bred society, would no doubt fail of the intended dramatic effect, and the spectators would declare the representation unnatural.

However our jargon of criticism may confound terms, we do not need to be reminded that art and nature are distinct; that art, though dependent on nature, is a separate creation; that art is selection and idealization, with a view to impressing the mind with human, or even higher than human, sentiments and ideas. We may not agree whether the perfect man and woman ever existed, but we do know that the highest representations of them in form—that in the old Greek sculptures—were the result of artistic selection of parts of many living figures.

When we praise our recent fiction for its photographic fidelity to nature we condemn it, for we deny to it the art which would give it value. We forget that the creation of the novel should be, to a certain extent, a synthetic process, and impart to human actions that ideal quality which we demand in painting. Heine regards Cervantes as the originator of the modern novel. The older novels sprang from the poetry of the Middle Ages; their themes were knightly adventure, their personages were the nobility; the common people did not figure in them. These romances, which had degenerated into absurdities, Cervantes overthrew by "Don Quixote." But in putting an end to the old romances he created a new school of fiction, called the modern novel, by introducing into his romance of pseudo-knighthood a faithful description of the lower classes, and intermingling the phases of popular life. But he had no one-sided tendency to portray the vulgar only; he brought together the higher and the lower in society, to serve as light and shade, and the aristocratic element was as prominent as the popular. This noble and chivalrous element disappears in the novels of the English who imitated Cervantes. "These English novelists since Richardson's reign," says Heine, "are prosaic natures; to the prudish spirit of their time even pithy descriptions of the life of the common people are repugnant, and we see on yonder side of the Channel those bourgeoisie novels arise, wherein the petty humdrum life of the middle classes is depicted." But Scott appeared, and effected a restoration of the balance in fiction. As Cervantes had introduced the democratic element into romances, so Scott replaced the aristocratic element, when it had disappeared, and only a prosaic, bourgeoisie fiction existed. He restored to romances the symmetry which we admire in "Don Quixote." The characteristic feature of Scott's historical romances, in the opinion of the great German critic, is the harmony between the artistocratic and democratic elements.

This is true, but is it the last analysis of the subject? Is it a sufficient account of the genius of Cervantes and Scott that they combined in their romances a representation of the higher and lower classes? Is it not of more importance how they represented them? It is only a part of the achievement of Cervantes that he introduced the common people into fiction; it is his higher glory that he idealized his material; and it is Scott's distinction also that he elevated into artistic creations both nobility and commonalty....