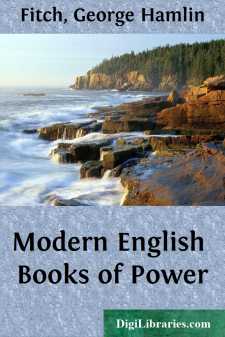 Add to My Favorites
Published: 10 years ago
Downloads: 92
Rating: (0 Votes)

My aim in this little book has been to give short sketches and estimates of the greatest modern English writers from Macaulay to Stevenson and Kipling. Omissions there are, but my effort has been to give the most characteristic writers a place and to try to stimulate the reader's interest in the man behind the book as well as in the best works of each author. Too much space is devoted in most literary criticism to the bare facts of biography and the details of essays or novels or histories written by authors. My plan has been to arouse interest both in the men and their books so that any reader of this volume may be stimulated to extend his knowledge of the modern English classics.

These chapters include the greatest English writers during the last one hundred and fifty years and they have been prepared mainly for those who have no thorough knowledge of modern English books or authors. They are of limited scope so that few quotations have been possible. But they have been written with an eager desire to help those who care to know the best works of modern English authors. In the same spirit the most appropriate illustrations have been secured and a helpful bibliography has been added. If this book helps readers to secure one lasting friend among these authors it will have done good missionary work; for to make the books of one man or woman of genius a part of our mental possessions is to be set on the broad highway to literary culture.

The Vital Quality in Literature

To Get the Spiritual Essence of a Great Book One Must Study the Man Who Wrote It—The Man Is the Best Epitome His Message.

In this volume as in its predecessor, "Comfort Found in Good Old Books," my aim has been to enforce the theory that behind every great book is a man, greater than the best book that he ever wrote. This strong spiritual quality which every one of the great authors puts into his best books is what we should strive to secure when we read these great classics. Unless we get this spiritual part we miss the essence of the book.

Hence it has been my aim in this volume to make clear what manner of men wrote these books which serve as the landmarks of modern English literature.

The scope of this book is limited, but from Macaulay to Kipling the effort has been to include those representative modern English authors who both in prose and verse best reflect the spiritual tendencies of their age. Whether essayists, historians, novelists or poets each of these writers has furnished something distinctive; each has caught some salient feature of his age and fixed it for all time in the amber of his thought.

And what a bead-roll is this of great English worthies: Macaulay, the most brilliant and learned of all English essayists; Scott, the finest story-teller of his own or any other age; Carlyle, the inspirer of ambitious youth; De Quincey, the greatest artist in style, whose words are as music to the sensitive ear; Dickens, the master painter of sorrows and joys of the common people; Thackeray, the best interpreter of human life and character; Charlotte Brontë, the brooding Celtic genius who laid bare the hearts of women; George Eliot, the greatest artist of her sex in mastery of human emotion; Ruskin, the first to teach the common people appreciation of art and architecture; Tennyson, the melodious singer who voiced the highest aspiration of his time; Browning, the greatest dramatic poet since Shakespeare; Charles Lamb, one of the tenderest of essayists; George Meredith, the most brilliant and suggestive novelist of the Victorian age; Stevenson, the best beloved and most artistic story-teller of his day; Hardy, the master painter of tragedies of rural life; and Kipling, the interpreter of Anglo-Indian life, the singer of the new age of science and discovery, the laureate of the gospel of blood and iron....