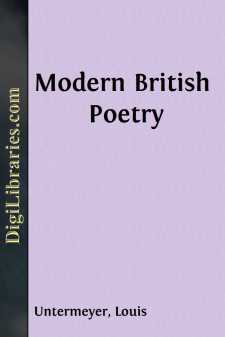 INTRODUCTORY The New Influences and Tendencies

Mere statistics are untrustworthy; dates are even less dependable. But, to avoid hairsplitting, what we call "modern" English literature may be said to date from about 1885. A few writers who are decidedly "of the period" are, as a matter of strict chronology, somewhat earlier. But the chief tendencies may be divided into seven periods. They are (1) The decay of Victorianism and the growth of a purely decorative art, (2) The rise and decline of the Æsthetic Philosophy, (3) The muscular influence of Henley, (4) The Celtic revival in Ireland, (5) Rudyard Kipling and the ascendency of mechanism in art, (6) John Masefield and the return of the rhymed narrative, (7) The war and the appearance of "The Georgians." It may be interesting to trace these developments in somewhat greater detail.

the end of victorianism

The age commonly called Victorian came to an end about 1885. It was an age distinguished by many true idealists and many false ideals. It was, in spite of its notable artists, on an entirely different level from the epoch which had preceded it. Its poetry was, in the main, not universal but parochial; its romanticism was gilt and tinsel; its realism was as cheap as its showy glass pendants, red plush, parlor chromos and antimacassars. The period was full of a pessimistic resignation (the note popularized by Fitzgerald's Omar Khayyám) and a kind of cowardice or at least a negation which, refusing to see any glamour in the actual world, turned to the Middle Ages, King Arthur, the legend of Troy—to the suave surroundings of a dream-world instead of the hard contours of actual experience.

At its worst, it was a period of smugness, of placid and pious sentimentality—epitomized by the rhymed sermons of Martin Farquhar Tupper, whose Proverbial Philosophy was devoured with all its cloying and indigestible sweetmeats by thousands. The same tendency is apparent, though far less objectionably, in the moralizing lays of Lord Thomas Macaulay, in the theatrically emotionalized verses of Robert Buchanan, Edwin Arnold and Sir Lewis Morris—even in the lesser later work of Alfred Tennyson.

And, without Tupper's emptiness or absurdities, the outworn platitudes again find their constant lover in Alfred Austin, Tennyson's successor as poet laureate. Austin brought the laureateship, which had been held by poets like Ben Jonson, Dryden, Southey and Wordsworth, to an incredibly low level; he took the thinning stream of garrulous poetic conventionality, reduced it to the merest trickle—and diluted it.

The poets of a generation before this time were fired with such ideas as freedom, a deep and burning awe of nature, an insatiable hunger for truth in all its forms and manifestations. The characteristic poets of the Victorian Era, says Max Plowman, "wrote under the dominance of churchliness, of 'sweetness and light,' and a thousand lesser theories that have not truth but comfort for their end."

The revolt against this and the tawdriness of the period had already begun; the best of Victorianism can be found not in men who were typically Victorian, but in pioneers like Browning and writers like Swinburne, Rossetti, William Morris, who were completely out of sympathy with their time....