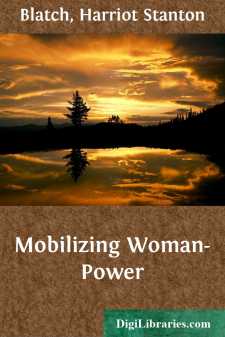 The nations in which women have influenced national aims face the nation that glorifies brute force. America opposes the exaltation of the glittering sword; opposes the determination of one nation to dominate the world; opposes the claim that the head of one ruling family is the direct and only representative of the Creator; and, above all, America opposes the idea that might makes right.

Let us admit the full weight of the paradox that a people in the name of peace turns to force of arms. The tragedy for us lay in there being no choice of ways, since pacific groups had failed to create machinery to adjust vital international differences, and since the Allies each in turn, we the last, had been struck by a foe determined to settle disagreements by force.

Never did a nation make a crusade more just than this of ours. We were patient, too long patient, perhaps, with challenges. We seek no conquest. We fight to protect the freedom of our citizens. On America's standard is written democracy, on that of Germany autocracy. Without reservation women can give their all to attain our end.

There may be a cleavage between the German people and the ruling class. It may be that our foe is merely the military caste, though I am inclined to believe that we have the entire German nation on our hands. The supremacy of might may be a doctrine merely instilled in the minds of the people by its rulers. Perhaps the weed is not indigenous, but it flourishes, nevertheless. Rabbits did not belong in Australia, nor pondweed in England, but there they are, and dominating the situation. Arrogance of the strong towards the weak, of the better placed towards the less well placed, is part of the government teaching in Germany. The peasant woman harries the dog that strains at the market cart, her husband harries her as she helps the cow drag the plough, the petty officer harries the peasant when he is a raw recruit, and the young lieutenant harries the petty officer, and so it goes up to the highest,--a well-planned system on the part of the superior to bring the inferior to a high point of material efficiency. The propelling spirit is devotion to the Fatherland: each believes himself a cog in the machine chosen of God to achieve His purposes on earth. The world hears of the Kaiser's "Ich und Gott," of his mailed fist beating down his enemies, but those who have lived in Germany know that exactly the same spirit reigns in every class. The strong in chastizing his inferior has the conviction that since might makes right he is the direct representative of Deity on the particular occasion.

The overbearing spirit of the Prussian military caste has drilled a race to worship might; men are overbearing towards women, women towards children, and the laws reflect the cruelties of the strong towards the weak.

As the recent petition of German suffragists to the Reichstag states, their country stands "in the lowest rank of nations as regards women's rights." It is a platitude just now worth repeating that the civilization of a people is indicated by the position accorded to its women....