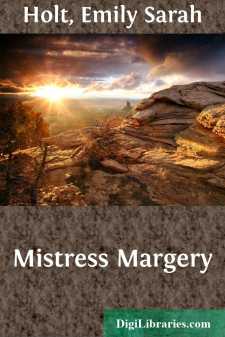 The sun was shining brightly on the battlements and casements of Lovell Tower. The season was spring, and the year 1395. Within the house, though it was barely seven o’clock in the morning, all was bustle and confusion, for Dame Lovell was superintending her handmaidens in the preparation of dinner. A buxom woman was Dame Lovell, neither tall nor short, but decidedly stout, with a round, good-natured face, which just then glowed and burned under the influence of the fire roaring on the large grateless hearth. She wore a black dress, heavily trimmed at the bottom with fur, and she carried on her head one of those remarkable elevations generally known as the Syrian or conical head-dress, made of black stiffened gauze, and spangled with golden stars. Her assistants, mostly girls of from sixteen to twenty-five years of age, were occupied in various parts of the kitchen; while Mistress Katherine, a staid-looking woman of middle age, who filled a post somewhat similar to the modern one of housekeeper, was employed at a side table in mixing some particularly elaborate compound. Among this busy throng moved Dame Lovell, now giving a stir to a pot, and now peeping into a pan, boxing the ears of any maiden who appeared remiss in her duty, and generally keeping up a strict and active supervision.

“Nan, thy leeks be not hewn small enough. Cicely, look to the pottage, that it boil not over. Al’ce, thou idle jade!”—with a sound box on the ear,—“thou hast left out the onions in thy blanch-porre! Margery! Madge! Why, Madge, I say! Where is Mistress Margery, maidens? Joan, lass, hie thee up, and see whether Mistress Margery be not in the chamber.”

Joan, a diminutive girl of sixteen, quitted the parsley she was chopping, and ran lithely out of the room, to which she soon returned, and, dropping a courtesy, announced that “Mistress Margery was in her chamber, and was coming presently,”—which latter word, in the year 1395, meant not “by and by,” as it now does, but “at present.” Mistress Margery verified the assertion of Joan by following her into the kitchen almost immediately. And since Mistress Margery is to play the important part of heroine, it may be well to devote a few words to her person and costume. She is the only child of Sir Geoffrey Lovell, Knight, and Dame Agnes Lovell, and is now seventeen years of age; rather under the middle height, slenderly formed, with an appearance of great fragility and delicacy; her complexion is very fair, of that extreme fairness which often betokens disease, and her face almost colourless. Her features are regular, and classical in their contour; her eyes are a clear grey—honest, truthful eyes, that look straight at you; and her hair, which is almost long enough, when let down, to touch her feet, is of that pale golden colour so much celebrated in the Middle Ages, and so very rarely to be seen now....