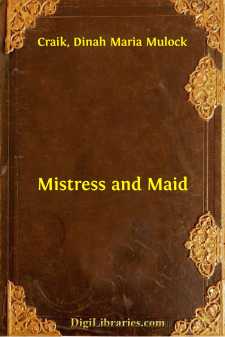 She was a rather tall, awkward, and strongly-built girl of about fifteen. This was the first impression the "maid" gave to her "mistresses," the Misses Leaf, when she entered their kitchen, accompanied by her mother, a widow and washer-woman, by name Mrs. Hand. I must confess, when they saw the damsel, the ladies felt a certain twinge of doubt as to whether they had not been rash in offering to take her; whether it would not have been wiser to have gone on in their old way—now, alas! grown into a very old way, so as almost to make them forget they had ever had any other—and done without a servant still.

Many consultations had the three sisters held before such a revolutionary extravagance was determined on. But Miss Leaf was beginning both to look and to feel "not so young as she had been;" Miss Selina ditto; though, being still under forty, she would not have acknowledged it for the world. And Miss Hilary young, bright, and active as she was, could by no possibility do every thing that was to be done in the little establishment: be, for instance, in three places at once—in the school-room, teaching little boys and girls, in the kitchen cooking dinner, and in the rooms up stairs busy at house-maid's work. Besides, much of her time was spent in waiting upon "poor Selina," who frequently was, or fancied her self, too ill to take any part in either the school or house duties.

Though, the thing being inevitable, she said little about it, Miss Leaf's heart was often sore to see Hilary's pretty hands smeared with blacking of grates, and roughened with scouring of floors. To herself this sort of thing had become natural—but Hilary!

All the time of Hilary's childhood, the youngest of the family had of course, been spared all house-work; and afterward her studies had left no time for it. For she was a clever girl, with a genuine love of knowledge Latin, Greek, and even the higher branches of arithmetic and mathematics, were not beyond her range; and this she found much more interesting than washing dishes or sweeping floors. True, she always did whatever domestic duty she was told to do; but her bent was not in the household line. She had only lately learned to "see dust," to make a pudding, to iron a shirt; and, moreover, to reflect, as she woke up to the knowledge of how these things should be done, and how necessary they were, what must have been her eldest sister's lot during all these twenty years! What pains, what weariness, what eternal toil must Johanna have silently endured in order to do all those things which till now had seemed to do themselves!

Therefore, after much cogitation as to the best and most prudent way to amend matters, and perceiving with her clear common sense that, willing as she might be to work in the kitchen, her own time would be much more valuably spent in teaching their growing school. It was Hilary who these Christmas holidays, first started the bold idea, "We must have a servant;" and therefore, it being necessary to begin with a very small servant on very low wages, (£3 per annum was, I fear the maximum), did they take this Elizabeth Hand....