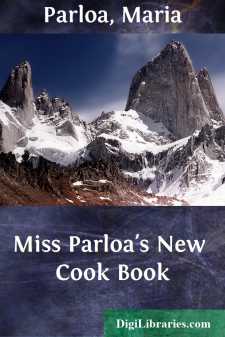 Upon the amount of practical knowledge of marketing that the housekeeper has, the comfort and expense of the family are in a great measure dependent; therefore, every head of a household should acquire as much of this knowledge as is practicable, and the best way is to go into the market. Then such information as is gained by reading becomes of real value. Many think the market not a pleasant or proper place for ladies. The idea is erroneous. My experience has been that there are as many gentlemen among marketmen as are to be found engaged in any other business. One should have a regular place at which to trade, as time is saved and disappointment obviated. If not a judge of meat, it is advisable, when purchasing, to tell the dealer so, and rely upon him to do well by you. He will probably give you a nicer piece than you could have chosen. If a housekeeper makes a practice of going to the market herself, she is able to supply her table with a better variety than she is by ordering at the door or by note, for she sees many good and fresh articles that would not have been thought of at home. In a book like this it is possible to treat at length only of such things as meat, fish and vegetables, which always form a large item of expense.

Beef is one of the most nutritious, and, in the end, the most economical, kinds of meat, for there is not a scrap of it which a good housekeeper will not utilize for food.

As to Choosing It.

Good steer or heifer beef has a fine grain, a yellowish-white fat, and is firm. When first cut it will be of a dark red color, which changes to a bright red after a few minutes' exposure to the air. It will also have a juicy appearance; the suet will be dry, crumble easily and be nearly free from fibre. The flesh and fat of the ox and cow will be darker, and will appear dry and rather coarse. The quantity of meat should be large for the size of the bones. Quarters of beef should be kept as long as possible before cutting. The time depends upon climate and conveniences, but in the North should be two or three weeks. A side of beef is first divided into two parts called the fore and hind quarters. These are then cut into variously-shaped and sized pieces. Different localities have different names for some of these cuts. The diagrams represent the pieces as they are sold in the Boston market, and the tables give the New York and Philadelphia names for the same pieces. In these latter two cities, when the side of beef is divided into halves, they cut farther back on the hind quarter than they do in Boston, taking in all the ribs—thirteen and sometimes fourteen. This gives one more rib roast. They do not have what in Boston is called the tip of the sirloin.

In Philadelphia they cut meat more as is done in Boston than they do in New York. The following diagram shows a hind quarter as it appears in Boston. In the other two cities the parts 1 and 13f are included in the fore quarter. The dotted lines show wherein the New York cutting differs from the Boston: