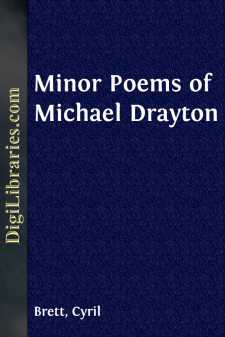 Michael Drayton was born in 1563, at Hartshill, near Atherstone, in Warwickshire, where a cottage, said to have been his, is still shown. He early became a page to Sir Henry Goodere, at Polesworth Hall: his own words give the best picture of his early years here. His education would seem to have been good, but ordinary; and it is very doubtful if he ever went to a university. Besides the authors mentioned in the Epistle to Henry Reynolds, he was certainly familiar with Ovid and Horace, and possibly with Catullus: while there seems no reason to doubt that he read Greek, though it is quite true that his references to Greek authors do not prove any first-hand acquaintance. He understood French, and read Rabelais and the French sonneteers, and he seems to have been acquainted with Italian. His knowledge of English literature was wide, and his judgement good: but his chief bent lay towards the history, legendary and otherwise, of his native country, and his vast stores of learning on this subject bore fruit in the Polyolbion.

While still at Polesworth, Drayton fell in love with his patron's younger daughter, Anne; and, though she married, in 1596, Sir Henry Rainsford of Clifford, Drayton continued his devotion to her for many years, and also became an intimate friend of her husband's, writing a sincere elegy on his death. About February, 1591, Drayton paid a visit to London, and published his first work, the Harmony of the Church, a series of paraphrases from the Old Testament, in fourteen-syllabled verse of no particular vigour or grace. This book was immediately suppressed by order of Archbishop Whitgift, possibly because it was supposed to savour of Puritanism. The author, however, published another edition in 1610; indeed, he seems to have had a fondness for this style of work; for in 1604 he published a dull poem, Moyses in a Map of his Miracles, re-issued in 1630 as Moses his Birth and Miracles. Accompanying this piece, in 1630, were two other 'Divine poems': Noah's Floud, and David and Goliath. Noah's Floud is, in part, one of Drayton's happiest attempts at the catalogue style of bestiary; and Mr. Elton finds in it some foreshadowing of the manner of Paradise Lost. But, as a whole, Drayton's attempts in this direction deserve the oblivion into which they, in common with the similar productions of other authors, have fallen. In the dedication and preface to the Harmony of the Church are some of the few traces of Euphuism shown in Drayton's work; passages in the Heroical Epistles also occur to the mind. He was always averse to affectation, literary or otherwise, and in Elegy viij deliberately condemns Lyly's fantastic style.

Probably before Drayton went up to London, Sir Henry Goodere saw that he would stand in need of a patron more powerful than the master of Polesworth, and introduced him to the Earl and Countess of Bedford. Those who believe Drayton to have been a Pope in petty spite, identify the 'Idea' of his earlier poems with Lucy, Countess of Bedford; though they are forced to acknowledge as self-evident that the 'Idea' of his later work is Anne, Lady Rainsford....