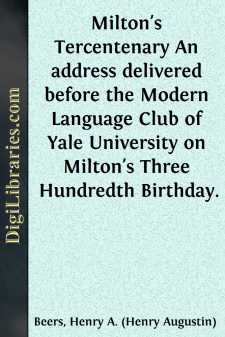 It is right that this anniversary should be kept in all English-speaking lands. Milton is as far away from us in time as Dante was from him; destructive criticism has been busy with his great poem; formidable rivals of his fame have arisen—Dryden and Pope, Wordsworth and Byron, Tennyson and Browning, not to speak of lesser names—poets whom we read perhaps oftener and with more pleasure. Yet still his throne remains unshaken. By general—by well-nigh universal—consent, he is still the second poet of our race, the greatest, save one, of all who have used the English speech.

The high epics, the Iliad, the Divine Comedy, do not appear to us as they appeared to their contemporaries, nor as they appeared to the Middle Ages or to the men of the Renaissance or of the eighteenth century. These peaks of song we see foreshortened or in changed perspective or from a different angle of observation. Their parallax varies from age to age, yet their stature does not dwindle; they tower forever, "like Teneriffe or Atlas unremoved." Paradise Lost does not mean the same thing to us that it meant to Addison or Johnson or Macaulay, and much that those critics said of it now seems mistaken. Works of art, as of nature, have perishable elements, and suffer a loss from time's transhifting. Homer's gods are childish, Dante's hell grotesque; and the mythology of the one and the scholasticism of the other are scarcely more obsolete to-day than Milton's theology. Yet in the dryest parts of Paradise Lost we feel the touch of the master. Two things in particular, the rhythm and the style, go on victoriously as by their own momentum. God the Father may be a school divine and Adam a member of Parliament, but the verse never flags, the diction never fails. The poem may grow heavy, but not languid, thin or weak. I confess that there are traits of Milton which repel or irritate; that there are poets with whom sympathy is easier. And if I were speaking merely as an impressionist, I might prefer them to him. But this does not affect my estimate of his absolute greatness.

All poets, then, and lovers of poetry, all literary critics and students of language must honor in Milton the almost faultless artist, the supreme master of his craft. But there is a reason why, not alone the literary class, but all men of English stock should celebrate Milton's tercentenary. There have been poets whose technique was exquisite, but whose character was contemptible. John Milton was not simply a great poet, but a great man, a heroic soul; and his type was characteristically English, both in its virtues and its shortcomings. Of Shakspere, the man, we know next to nothing. But of Milton personally we know all that we need to know, more than is known of many a modern author. There is abundance of biography and autobiography. Milton had a noble self-esteem, and he was engaged for twenty years in hot controversies. Hence those passages of apologetics scattered through his prose works, from which the lives of their author have been largely compiled....