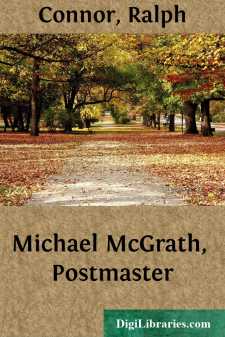 Some men and some scenes so fasten themselves into one's memory that the years, with their crowding scenes and men, have no power to displace them. I can never forget "Ould Michael" and the scene of my first knowing him. All day long I rode, driving in front my pack-pony laden with my photograph kit, tent and outfit, following the trail that would end somewhere on the Pacific Coast, some hundreds of miles away. I was weary enough of dodging round the big trees, pushing through underbrush, scrambling up and down mountain-sides, hugging cliffs where the trail cut in and wading warily through the roaring torrent of "Sixty-mile Creek." As the afternoon wore on, the trail left the creek and wound away over a long slope up the mountain-side.

"Ginger," said I to my riding pony, "we are getting somewhere"—for our trail began to receive other trails from the side valleys and the going was better. At last it pushed up into the open, circled round a shoulder of the mountain, clinging tight, for the drop was sheer two hundred feet, and—there before us stretched the great Fraser Valley! From my feet the forest rolled its carpet of fir-tops—dark-green, soft, luxurious. Far down to the bottom and up again, in waving curves it swept, to the summit of the distant mountains opposite, and through this dark-green mass the broad river ran like a silver ribbon gleaming in the sunlight.

Following the line of the trail, my eye fell upon that which has often made men's hearts hard and lured them on to joyous death. There, above the green tree-tops, in a clearing, stood a tall white mast and from the peak, flaunting its lazy, proud defiance, flew a Union Jack.

"Now, Ginger, how in the name of the Empire comes that brave rag to be shaking itself out over these valleys!"

Ginger knew not, but, in answer to my heels, set off at a canter down the slope and, in a few minutes, we reached a grassy bench that stretched down to the river-bank. On the bench was huddled an irregular group of shacks and cabins and, in front of the first and most imposing of them, stood the tall mast with its floating flag. On the wide platform that ran in front of this log cabin a man was sitting, smoking a short bull-dog pipe. By his dress and style I saw at once that he had served in Her Majesty's army. As I rode up under the flag I lifted my cap, held it high and called out: "God save the Queen!" Instantly he was on his feet and, coming to attention with a military salute, replied with great fervor: "God bless her!" From that moment he took me to his heart.

That was my introduction to "Ould Michael," as everyone in the Valley called him, and as he called himself.

After his fifth glass, when he would become dignified, "Ould Michael" would drop his brogue and speak of himself as "Sergeant McGrath, late of Her Majesty's Ninety-third Highlanders," Irishman though he was.

Though he had passed his sixtieth year, he was still erect and brisk enough in his movement, save for a slight hitch in his left leg....