Micah Clarke His Statement as made to his three grandchildren Joseph, Gervas and Reuben During the Hard Winter of 1734 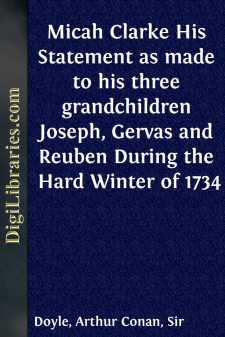 Chapter I. Of Cornet Joseph Clarke of the Ironsides

It may be, my dear grandchildren, that at one time or another I have told you nearly all the incidents which have occurred during my adventurous life. To your father and to your mother, at least, I know that none of them are unfamiliar. Yet when I consider that time wears on, and that a grey head is apt to contain a failing memory, I am prompted to use these long winter evenings in putting it all before you from the beginning, that you may have it as one clear story in your minds, and pass it on as such to those who come after you. For now that the house of Brunswick is firmly established upon the throne and that peace prevails in the land, it will become less easy for you every year to understand how men felt when Englishmen were in arms against Englishmen, and when he who should have been the shield and the protector of his subjects had no thought but to force upon them what they most abhorred and detested.

My story is one which you may well treasure up in your memories, and tell again to others, for it is not likely that in this whole county of Hampshire, or even perhaps in all England, there is another left alive who is so well able to speak from his own knowledge of these events, or who has played a more forward part in them. All that I know I shall endeavour soberly and in due order to put before you. I shall try to make these dead men quicken into life for your behoof, and to call back out of the mists of the past those scenes which were brisk enough in the acting, though they read so dully and so heavily in the pages of the worthy men who have set themselves to record them. Perchance my words, too, might, in the ears of strangers, seem to be but an old man's gossip. To you, however, who know that these eyes which are looking at you looked also at the things which I describe, and that this hand has struck in for a good cause, it will, I know, be different. Bear in mind as you listen that it was your quarrel as well as our own in which we fought, and that if now you grow up to be free men in a free land, privileged to think or to pray as your consciences shall direct, you may thank God that you are reaping the harvest which your fathers sowed in blood and suffering when the Stuarts were on the throne.

I was born then in the year 1664, at Havant, which is a flourishing village a few miles from Portsmouth off the main London road, and there it was that I spent the greater part of my youth. It is now as it was then, a pleasant, healthy spot, with a hundred or more brick cottages scattered along in a single irregular street, each with its little garden in front, and maybe a fruit tree or two at the back. In the middle of the village stood the old church with the square tower, and the great sun-dial like a wrinkle upon its grey weather-blotched face. On the outskirts the Presbyterians had their chapel; but when the Act of Uniformity was passed, their good minister, Master Breckinridge, whose discourses had often crowded his rude benches while the comfortable pews of the church were empty, was cast into gaol, and his flock dispersed....