Memoirs of the Private Life, Return, and Reign of Napoleon in 1815, Vol. II 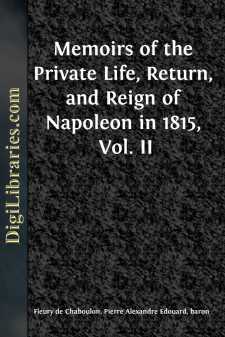 Add to My Favorites
Published: 8 years ago
Downloads: 68
Rating: (0 Votes)

At the same period (May the 1st) the Emperor received a fresh proof of the little confidence, that men deserve, and of the horrible facility, with which they sacrifice their duties and their sentiments, to the suggestions of their covetousness or their ambition.

Of all the ministers of Napoleon there was not one, who, at the time of his return, lavished on him so many protestations of fidelity and devotion to his service, as the Duke of Otranto. "And this fidelity, if he could have doubted it, would have been guarantied by the mandate, under which he (M. Fouché) groaned, at the moment when the return of Napoleon restored him to liberty, and perhaps to life."

Yet what was the astonishment of the Emperor, when the Duke of Vicenza came to inform him, that a secret agent of M. de Metternich had arrived at Paris from Vienna, and appeared to have had a mysterious interview with M. Fouché! The Emperor immediately ordered M. Réal, prefect of the police, to make search after this emissary. He was arrested, and declared:

That, being employed by a banking-house at Vienna, to settle accounts of interest with several bankers at Paris, he had been sent for by M. de Metternich; and that this prince had entrusted him with a letter for the French minister of police:

That he was ignorant of the contents of this letter; but knew it was interlined with sympathetic ink: and the prince had delivered to him a powder for making the hidden characters appear:

That Baron de Werner, diplomatic agent, was to be at Bâle on the 1st of May, to receive the answer of the Duke of Otranto:

That a fictitious statement of an account had been given him, which was to serve as a sign, to make known to M. Werner the agent sent by the French minister:

In fine, that he had delivered the letter and the account to the Duke of Otranto, who had told him, to attend quickly to his business, and return to Vienna as soon as possible.

The Emperor immediately sent for M. Fouché, under pretence of conversing with him on affairs of state.

M. Fouché preserved the most profound silence on what had passed with the envoy of M. de Metternich, and displayed no marks of embarrassment or uneasiness.

The first thought of Napoleon was, to seize the papers of his treacherous minister: but persuaded, that he was too adroit, and too prudent, to retain any traces of his treason, he deemed it preferable, in order to come at the truth, to send some one to Bâle, who should introduce himself to M. Werner as from the Duke. Napoleon attached great importance to this mission. He condescended to cast his eyes on me to execute it; and, after having disclosed to me "the perfidy of that infamous Fouché," he said to me: "You will go immediately to the Duke of Vicenza: he will give you passports both in the King's name and in mine: you will learn at the frontier, which will avail you most. Here is an order under my own hand, to all the generals, prefects, and lieutenants of police, who may be on the Rhine, to furnish you with the means of leaving and returning to France, and with all the assistance you may require, within the kingdom and even without. I command them, strictly to conform to every thing you may judge proper to direct. I think you will pass. I have never heard of this M....