Memoirs of the Life of the Rt. Hon. Richard Brinsley Sheridan - Volume 02 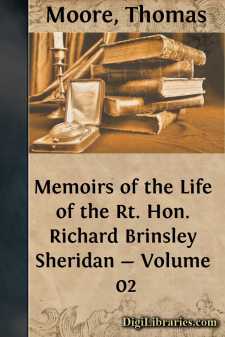 CHAPTER I. IMPEACHMENT OF MR. HASTINGS.

The motion of Mr. Burke on the 10th of May, 1787, "That Warren Hastings, Esq., be impeached," having been carried without a division, Mr. Sheridan was appointed one of the Managers, "to make good the Articles" of the Impeachment, and, on the 3d of June in the following year, brought forward the same Charge in Westminster Hall which he had already enforced with such wonderful talent in the House of Commons.

To be called upon for a second great effort of eloquence, on a subject of which all the facts and the bearings remained the same, was, it must be acknowledged, no ordinary trial to even the most fertile genius; and Mr. Fox, it is said, hopeless of any second flight ever rising to the grand elevation of the first, advised that the former Speech should be, with very little change, repeated. But such a plan, however welcome it might be to the indolence of his friend, would have looked too like an acknowledgment of exhaustion on the subject to be submitted to by one so justly confident in the resources both of his reason and fancy. Accordingly, he had the glory of again opening, in the very same field, a new and abundant spring of eloquence, which, during four days, diffused its enchantment among an assembly of the most illustrious persons of the land, and of which Mr. Burke pronounced at its conclusion, that "of all the various species of oratory, of every kind of eloquence that had been heard, either in ancient or modern times; whatever the acuteness of the bar, the dignity of the senate, or the morality of the pulpit could furnish, had not been equal to what that House had that day heard in Westminster Hall. No holy religionist, no man of any description as a literary character, could have come up, in the one instance, to the pure sentiments of morality, or in the other, to the variety of knowledge, force of imagination, propriety and vivacity of allusion, beauty and elegance of diction, and strength of expression, to which they had that day listened. From poetry up to eloquence there was not a species of composition of which a complete and perfect specimen might not have been culled, from one part or the other of the speech to which he alluded, and which, he was persuaded, had left too strong an impression on the minds of that House to be easily obliterated."

As some atonement to the world for the loss of the Speech in the House of Commons, this second master-piece of eloquence on the same subject has been preserved to us in a Report, from the short-hand notes of Mr. Gurney, which was for some time in the possession of the late Duke of Norfolk, but was afterwards restored to Mr. Sheridan, and is now in my hands.

In order to enable the reader fully to understand the extracts from this Report which I am about to give, it will be necessary to detail briefly the history of the transaction, on which the charge brought forward in the Speech was founded.

Among the native Princes who, on the transfer of the sceptre of Tamerlane to the East India Company, became tributaries or rather slaves to that Honorable body, none seems to have been treated with more capricious cruelty than Cheyte Sing, the Rajah of Benares....