Memoirs of the Life of Sir Walter Scott, Volume V (of 10) 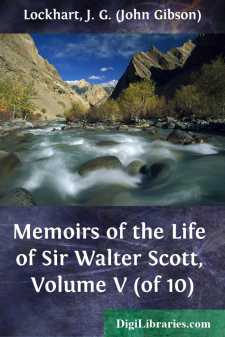 By the 11th of November, then, The Lord of the Isles had made great progress, and Scott had also authorized Ballantyne to negotiate among the booksellers for the publication of a second novel. But before I go further into these transactions, I must introduce the circumstances of Scott's first connection with an able and amiable man, whose services were of high importance to him, at this time and ever after, in the prosecution of his literary labors. Calling at Ballantyne's printing-office while Waverley was in the press, he happened to take up a proof sheet of a volume entitled "Poems, with notes illustrative of traditions in Galloway and Ayrshire, by Joseph Train, Supervisor of Excise at Newton-Stewart." The sheet contained a ballad on an Ayrshire tradition, about a certain "Witch of Carrick," whose skill in the black art was, it seems, instrumental in the destruction of one of the scattered vessels of the Spanish Armada. The ballad begins:—

"Why gallops the palfrey with Lady Dunore?Who drives away Turnberry's kine from the shore?Go tell it in Carrick, and tell it in Kyle—Although the proud Dons are now passing the Moil,On this magic clew,That in fairyland grew,Old Elcine de Aggart has taken in handTo wind up their lives ere they win to our strand."

Scott immediately wrote to the author, begging to be included in his list of subscribers for a dozen copies, and suggesting at the same time a verbal alteration in one of the stanzas of this ballad. Mr. Train acknowledged his letter with gratitude, and the little book reached him just as he was about to embark in the lighthouse yacht. He took it with him on his voyage, and, on returning home again, wrote to Mr. Train, expressing the gratification he had received from several of his metrical pieces, but still more from his notes, and requesting him, as he seemed to be enthusiastic about traditions and legends, to communicate any matters of that order connected with Galloway which he might not himself think of turning to account; "for," said Scott, "nothing interests me so much as local anecdotes; and, as the applications for charity usually conclude, the smallest donation will be thankfully accepted."

Mr. Train, in a little narrative with which he has favored me, says, that for some years before this time he had been engaged, in alliance with a friend of his, Mr. Denniston, in collecting materials for a History of Galloway; they had circulated lists of queries among the clergy and parish schoolmasters, and had thus, and by their own personal researches, accumulated "a great variety of the most excellent materials for that purpose;" but that, from the hour of his correspondence with Walter Scott, he "renounced every idea of authorship for himself," resolving, "that thenceforth his chief pursuit should be collecting whatever he thought would be most interesting to him;" and that Mr. Denniston was easily persuaded to acquiesce in the abandonment of their original design. "Upon receiving Mr. Scott's letter," says Mr. Train, "I became still more zealous in the pursuit of ancient lore, and being the first person who had attempted to collect old stories in that quarter with any view to publication, I became so noted, that even beggars, in the hope of reward, came frequently from afar to Newton-Stewart, to recite old ballads and relate old stories to me." Erelong, Mr. Train visited Scott both at Edinburgh and at Abbotsford; a true affection continued ever afterwards to be maintained between them; and this generous ally was, as the prefaces to the Waverley Novels signify, one of the earliest confidants of that series of works, and certainly the most efficient of all the author's friends in furnishing him with materials for their composition. Nor did he confine himself to literary services: whatever portable object of antiquarian curiosity met his eye, this good man secured and treasured up with the same destination; and if ever a catalogue of the museum at Abbotsford shall appear, no single contributor, most assuredly, will fill so large a space in it as Mr....