Memoirs of the Life of Sir Walter Scott, Volume I (of 10) 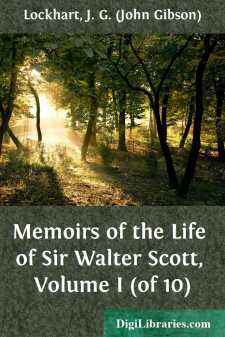 Lockhart's Memoirs of the Life of Sir Walter Scott, Bart., which divides with Boswell's Life of Johnson the honor of leading all lives of English men of letters, was first published in seven volumes in 1837-1838. A second edition, with some corrections, some slight revisions, and a few additions, mostly in the form of notes, was published in 1839, and this has remained ever since the standard edition. Later, in 1848, Lockhart prepared, at the request of the publishers of that work, a condensation of his magnum opus, and took that occasion to add a few facts bearing upon the Life which had occurred since the original publication, and a few comments which it would not have been in good taste to make in the first instance. Throughout his original work, Lockhart, with all his openness of speech, yet refrained from certain personal references, the subjects of which were too recent for remark, and he concealed many names under the disguise of initials.

Since the edition of 1839 there have been many issues of this great work on both sides of the Atlantic. As late as 1861, Messrs. Ticknor and Fields, predecessors of the present publishers of the work, issued an edition in nine volumes, and took occasion to insert some material from Lockhart's abridgment. They prefaced the edition, which they dedicated to Nathaniel Hawthorne, with a brief sketch of Lockhart.

Neither these publishers nor any others, so far as we know, have ever done more than reprint the original work, save for the slight modification just mentioned. Meanwhile for the past sixty years, and more especially during the past twenty years, a crowd of books has been published throwing light on Lockhart's great subject. Memoirs, reminiscences, editions of Scott's writings, literary studies, articles in reviews and magazines have added materially to our knowledge not only of Scott, but of many others of the personages who throng the chapters of Lockhart's work. Lockhart himself has been made the subject of a generous biography, and it would seem as though, lasting as is the fame of the Life, its necessary silences were becoming every year more conspicuous.

Accordingly, the present publishers resolved to issue an edition which should repair the damage which Time had wrought, and they entrusted the editing to Miss Susan M. Francis, who through her long conversance with the original work, and her familiarity with the literature which has grown up about Scott, as well as her knowledge of the more or less obscure sources of information, was peculiarly competent not only to do the service of Old Mortality, but to set in order the inscriptions still to be added to the stones of Scott's associates.

The principle upon which Lockhart's Scott is now edited may be stated in very few words. The original work is reprinted without change, except that initials have been extended to full names in a great many instances, obvious printers' errors corrected, and Scott's journals revised to conform with the authoritative edition by Mr....