Memoirs of Life and Literature 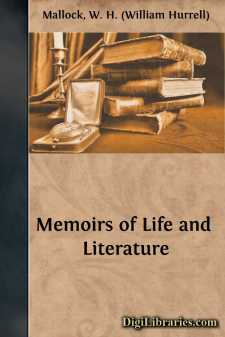 "Memoirs" is a word which, as commonly used, includes books of very various kinds, ranging from St. Augustine's Confessions to the gossip of Lady Dorothy Nevill. Such books, however, have all one family likeness. They all of them represent life as seen by the writers from a personal point of view; and in this sense it is to the family of Memoirs that the present book belongs.

But the incidents or aspects of life which a book of memoirs describes represent something more than themselves. Whether the writer is conscious of the fact or no, they represent a circle of circumstances, general as well as private, to which his individual character reacts; and his reactions, as he records them, may in this way acquire a meaning and unity which have their origin in the age—in the general conditions and movements which his personal recollections cover—rather than in any qualities or adventures which happen to be exclusively his own. Thus if any writer attempts to do what I have done myself—namely, to examine or depict in books of widely different kinds such aspects and problems of life—social, philosophical, religious, and economic—as have in turn engrossed his special attention, he may venture to hope that a memoir of his own activities will be taken as representing an age, rather than a personal story, his personal story being little more than a variant of one which many readers will recognize as common to themselves and him.

Now for all reflecting persons whose childhood reaches back to the middle of the nineteenth century, the most remarkable feature of the period which constitutes the age for themselves cannot fail to be a sequence of remarkable and momentous changes—changes alike in the domains of science, religion, and society; and if any one of such persons should be asked, "Changes from what?" his answer will be, if he knows how to express himself, "Changes from the things presented to him by his first remembered experiences, and by him taken for granted," such as the teaching, religious or otherwise, received by him, and the general constitution of society as revealed to him by his own observation and the ways and conversation of his elders. These are the things which provide the child's life with its starting point, and these are determined by the facts of family tradition and parentage. It is, therefore, with a description of such family facts that the author of a memoir like the present ought properly to begin.

The Mallocks, who have for nearly three hundred years been settled at Cockington Court, near to what is now Torquay, descend from a William Malet, Mallek, or Mallacke, who was, about the year 1400, possessed of estates lying between Lyme and Axmouth. This individual, according to the genealogists of the Heralds' College, was a younger son of Sir Baldwyn Malet of Enmore, in the county of Dorset. His descendants, at all events, from this time onward became connected by marriage with such well-known West Country families as the Pynes, the Drakes, the Churchills, the Yonges of Colyton, the Willoughbys of Payhembury, the Trevelyans, the Tuckfields (subsequently Hippesleys), the Strodes of Newnham, the Aclands, the Champernownes, and the Bullers. Between the reigns of Henry VII and Elizabeth they provided successive Parliaments with members for Lyme and Poole. One of them, Roger, during the reign of the latter sovereign, found his way to Exeter, where, as a banker or "goldsmith," he laid the foundations of what was then a very great fortune, and built himself a large town house, of which one room is still intact, with the queen's arms and his own juxtaposed on the paneling. The fortune accumulated by him was, during the next two reigns, notably increased by a second Roger, his son, in partnership with Sir Ferdinando Gorges, military governor of Plymouth, who had somehow become possessed of immense territories in Maine, and was a prominent figure in the history of English trade with America.

The second Roger, about the year 1640, purchased the Cockington property from Sir Henry Cary, a Cavalier, who appears to have been a typical sufferer from his devotion to the royal cause....