Memoirs Of Fanny Hill A New and Genuine Edition from the Original Text (London, 1749) 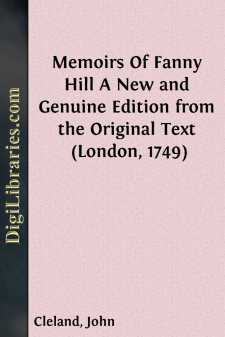 Add to My Favorites
Published: 9 years ago
Downloads: 333
Rating: (0 Votes)

I sit down to give you an undeniable proof of my considering your desires as indispensable orders. Ungracious then as the task may be, I shall recall to view those scandalous stages of my life, out of which I emerged, at length, to the enjoyment of every blessing in the power of love, health and fortune to bestow; whilst yet in the flower of youth, and not too late to employ the leisure afforded me by great ease and affluence, to cultivate an understanding, naturally not a despicable one, and which had, even amidst the whirl of loose pleasures I had been tossed in, exerted more observation on the characters and manners of the world than what is common to those of my unhappy profession, who, looking on all though or reflection as their capital enemy, keep it at as great a distance as they can, or destroy it without mercy.

Hating, as I mortally do, all long unnecessary prefaces, I shall give you good quarter in this, and use no farther apology, than to prepare you for seeing the loose part of my life, written with the same liberty that I led it.

Truth! stark, naked truth, is the word; and I will not so much as take the pains to bestow the strip of a gauze wrapper on it, but paint situations such as they actually rose to me in nature, careless of violating those laws of decency that were never made for such unreserved intimacies as ours; and you have too much sense, too much knowledge of the originals, to sniff prudishly and out of character at the pictures of them. The greatest men, those of the first and most leading taste, will not scruple adorning their private closets with nudities, though, in compliance with vulgar prejudices, they may not think them decent decorations of the staircase, or salon.

This, and enough, premised, I go souse into my personal history. My maiden name was Frances Hill. I was born at a small village near Liverpool, in Lancashire, of parents extremely poor, and, I piously believe, extremely honest.

My father, who had received a maim on his limbs, that disabled him from following the more laborious branches of country drudgery, got, by making nets, a scanty subsistence, which was not much enlarged by my mother's keeping a little day-school for the girls in her neighborhood. They had had several children; but none lived to any age except myself, who had received from nature a constitution perfectly healthy.

My education, till past fourteen, was no better than very vulgar: reading, or rather spelling, an illegible scrawl, and a little ordinary plain work, composed the whole system of it; and then all my foundation in virtue was no other than a total ignorance of vice, and the shy timidity general to our sex, in the tender age of life, when objects alarm or frighten more by their novelty than anything else. But then, this is a fear too often cured at the expense of innocence, when Miss, by degrees, begins no longer to look on a man as a creature of prey that will eat her.

My poor mother had divided her time so entirely between her scholars and her little domestic cares, that she had spared very little to my instruction, having, from her own innocence from all ill, no hint or thought of guarding me against any....