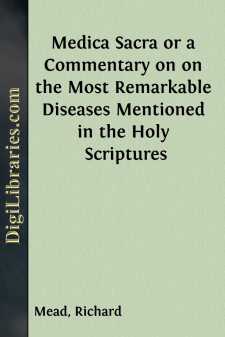 T is a natural, nor can it be deemed an illaudable curiosity to be desirous of being informed of whatever relates to those who have eminently distinguished themselves for sagacity, parts, learning, or what else may have exalted their characters, and thereby entitled them to a degree of respect superior to the rest of their cotemporaries. The transmission of such particulars, has ever been thought no more than discharging a debt due to posterity; wherefore it is hoped, that what is here intended to be offered to the publick, relative to a gentleman, who is universally allowed to have merited so largely in the republic of letters, and more particularly in his own profession, a profession, not less useful than respectable, will not be judged impertinent or disagreeable.

Our learned author was descended from a distinguished family in Buckinghamshire, and born at Stepney the second of August 1673. His father, Mr. Matthew Mead, was held in great esteem as a divine among the presbyterians, and was possessed, during their usurped power, of the living of Stepney; from whence he was ejected the second year after the restoration of king Charles the IId. Nevertheless, tho’ he had fifteen children, of whom our Richard was the seventh, he found means, with a moderate fortune, to give them a compleat education. To this purpose he kept a tutor in his house to instruct them, and they were taught latin rather by practice than by rules.

Party-rage perhaps never run higher than about the latter end of Charles the IId’s reign; hereby this little domestic academy was dispersed in 1683. The king, or rather his ministers, were determined to be revenged on those, whom they could not prevail on to concur with their measures. Mr. Mead (the father) was accused of being concerned in some designs against the court; wherefore being conscious that even his being a presbyterian, rendered him obnoxious to those in power, he chose rather to consult his security by a retreat, then to rely upon his innocence; to this purpose he sought and found that repose in Holland, which was denied him in his own country; having first placed his son Richard at a school, under the tuition of an able master of his own principles: under whose care our young gentleman, by a ready genius, strong memory, and close application, made a great proficiency. At seventeen years of age he was sent to Utrecht, to be further instructed in liberal knowledge, by the celebrated Grævius, with whom he continued three years.

Having determined to devote his attention to medicine, he removed from Utrecht to Leyden, where he attended Dr. Herman’s botanical lectures, and was initiated into the theory and practice of physick, by the truely eminent Dr. Pitcairn, who then held the professorial chair of this science in that university: here our young student’s assiduity and discernment, so effectually recommended him to the professor, who was not very communicative of his instructions out of the college, that he established a lasting correspondence with him, and received several observations from him, which he inserted in one of his subsequent productions.

His academical studies being finished, Mr. Mead sought further accomplishments in Italy, whither he was accompanied by his elder brother, Mr. Polhill, and Dr. Thomas Pellet, afterwards president of the college of physicians.

In the course of this tour, Mr. Mead commenced doctor in philosophy and medicine at Padua, the twenty-sixth of August 1695, and afterwards spent some time at Naples and Rome: how advantageous to himself, as well as how useful to mankind he rendered his travels, his works bear ample testimony.

About the middle of the year 1696, he returned home, and settled at Stepney, in the neighbourhood where he was born: the success, he met with in his practice here, established his reputation, and was a happy presage of his future fortunes....