McAllister and His Double 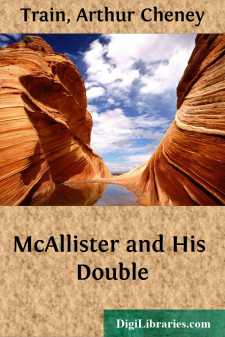 McAllister was out of sorts. All the afternoon he had sat in the club window and watched the Christmas shoppers hurrying by with their bundles. He thanked God he had no brats to buy moo-cows and bow-wows for. The very nonchalance of these victims of a fate that had given them families irritated him. McAllister was a clubman, pure and simple; that is to say though neither simple nor pure, he was a clubman and nothing more. He had occupied the same seat by the same window during the greater part of his earthly existence, and they were the same seat and window that his father had filled before him. His select and exclusive circle called him "Chubby," and his five-and-forty years of terrapin and cocktails had given him a graceful rotundity of person that did not belie the name. They had also endowed him with a cheerful though somewhat florid countenance, and a permanent sense of well-being.

As the afternoon wore on and the pedestrians became fewer, McAllister sank deeper and deeper into gloom. The club was deserted. Everybody had gone out of town to spend Christmas with someone else, and the Winthrops, on whom he had counted for a certainty, had failed for some reason to invite him. He had waited confidently until the last minute, and now he was stranded, alone.

It began to snow softly, gently. McAllister threw himself disconsolately into a leathern armchair by the smouldering logs on the six-foot hearth. A servant in livery entered, pulled down the shades, and after touching a button that threw a subdued radiance over the room, withdrew noiselessly.

"Come back here, Peter!" growled McAllister. "Anybody in the club?"

McAllister swore under his breath.

McAllister shot a quick glance at him.

This time Peter got almost to the door.

"Er—Peter; ask Mr. Tomlinson if he will dine with me."

Peter presently returned with the intelligence that Mr. Tomlinson would be delighted.

"Of course," grumbled McAllister to himself. "No one ever knew Tomlinson to refuse anything."

He ordered dinner, and then took up an evening paper in which an effort had been made to conceal the absence of news by summarizing the achievements of the past year. Staring head-lines invited his notice to

A YEAR OF PROGRESS.

What the Tenement-House Commission Has Accomplished.

He threw down the paper in disgust. This reform made him sick. Tenements and prisons! Why were the papers always talking about tenements and prisons? They were a great deal better than the people who lived in them deserved. He recalled Wilkins, his valet, who had stolen his black pearl scarf-pin. It increased his ill-humor. Hang Wilkins! The thief was probably out by this time and wearing the pin. It had been a matter of jest among his friends that the servant had looked not unlike his master. McAllister winced at the thought.

An hour and a half later, Tomlinson and McAllister, having finished a sumptuous repast, stared stupidly at each other across their liqueurs. They were stuffed and bored. Tomlinson was a thin man who knew everything positively. McAllister hated him. He always felt when in his company like the woman who invariably answered her husband's remarks by "'Tain't so! It's just the opposite!" Tomlinson was trying to make conversation by repeating assertively what he had read in the evening press.

"Now, our prisons," he announced authoritatively. "Why, it is outrageous! The people are crowded in like cattle; the food is loathsome. It's a disgrace to a civilized city!"

This was the last straw to McAllister.

"Look here," he snapped back at Tomlinson, who shrank behind his cigar at the vehemence of the attack, "what do you know about it? I tell you it's all rot! It's all politics! Our tenements are all right, and so are our prisons. The law of supply and demand regulates the tenements; and who pays for the prisons, I'd like to know?...