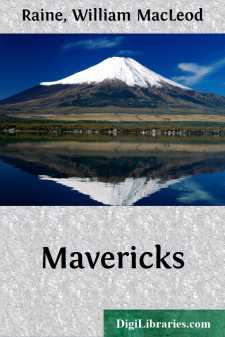 Phyllis leaned against the door-jamb and looked down the long road which wound up from the valley and lost itself now and again in the land waves. Miles away she could see a little cloud of dust travelling behind the microscopic stage, which moved toward her almost as imperceptibly as the minute-hand of a clock. A bronco was descending the hill trail from the Flagstaff mine, and its rider announced his coming with song in a voice young and glad.

floated the words to her across the sunlit open.

If the girl heard, she heeded not. One might have guessed her a sullen, silent lass, and would have done her less than justice. For the storm in her eyes and the curl of the lip were born of a mood and not of habit. They had to do with the gay vocalist who drew his horse up in front of her and relaxed into the easy droop of the experienced rider at rest.

Her dark, level gaze came round and met his sunniness without response.

"And you don't think you see much then?" he suggested lightly.

She gave him no other answer than the one he found in the rigor of her straight figure and the flash of her dark eyes.

"Mad at me, Phyl?" Crossing his arms on the pommel of the saddle he leaned toward her, half coaxing, half teasing.

The girl chose to ignore him and withdrew her gaze to the stage, still creeping antlike toward the hills.

he hummed audaciously, ready to catch her smile when it came.

It did not come. He thought he had never seen her carry her dusky good looks more scornfully. With a movement of impatience she brushed back a rebellious lock of blue-black hair from her temple.

"Somebody's acting right foolish," he continued jauntily. "It was all in fun, and in a game at that."

"I wasn't playing," he heard, though the profile did not turn in the least toward him.

"Well, I hated to let you stay a wall-flower."

"I don't play kissing games any more," she informed him with dignity.

"Sho, Phyl! I told you 'twas only in fun," he justified himself. "A kiss ain't anything to make so much fuss over. You ain't the first girl that ever was kissed."

She glanced quickly at him, recalling stories she had heard of his boldness with girls. He had taken off his hat and the golden locks of the boy gleamed in the sunlight. Handsome he surely was, though a critic might have found weakness in the lower part of the face. Chin and mouth lacked firmness.

"So I've been told," she answered tartly.

Slipping to the ground, he trailed his rein.

"You don't need to depend on hearing," he said, moving toward her.

"What do you mean?" she flared.

"You remember well enough—at the social down to Peterson's."

"We were children then—or I was."