Matthew Arnold's Sohrab and Rustum and Other Poems 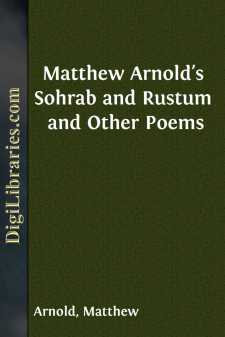 INTRODUCTION A SHORT LIFE OF ARNOLD

Matthew Arnold, poet and critic, was born in the village of Laleham,Middlesex County, England, December 24, 1822. He was the son of Dr.Thomas Arnold, best remembered as the great Head Master at Rugby andin later years distinguished also as a historian of Rome, and of MaryPenrose Arnold, a woman of remarkable character and intellect.

Devoid of stirring incident, and, on the whole, free from the eccentricities so common to men of genius, the story of Arnold's life is soon told. As a boy he lived the life of the normal English lad, with its healthy routine of task and play. He was at school at both Laleham and Winchester, then at Rugby, where he attracted attention as a student and won a prize for poetry. In 1840 he was elected to an open scholarship at Balliol College, Oxford, and the next year matriculated for his university work. Arnold's career at Oxford was a memorable one. While here he was associated with such men as John Duke Coleridge, John Shairp, Dean Fraser, Dean Church, John Henry Newman, Thomas Hughes, the Froudes, and, closest of all, with Arthur Hugh Clough, whose early death he lamented in his exquisite elegiac poem—Thyrsis. Among this brilliant company Arnold moved with ease, the recognized favorite. Having taken the Newdigate prize for English verse, and also having won a scholarship, he was graduated with honors in 1844, and in March of the following year had the additional distinction of being elected a Fellow of Oriel, the crowning glory of an Oxford graduate. He afterward taught classics for a short time at Rugby, then in 1847 accepted the post of private secretary to the Marquis of Lansdowne, Lord President of the Council, which position he occupied until 1851, when he was appointed Lay Inspector of Schools by the Committee on Education. The same year he married Frances Lucy Wightman, daughter of Sir William Wightman, judge of the Court of the Queen's Bench.

Arnold's record as an educator is unparalleled in the history of England's public schools. For more than thirty-five years he served as inspector and commissioner, which offices he filled with efficiency. As inspector he was earnest, conscientious, versatile; beloved alike by teachers and pupils. The Dean of Salisbury likened his appearance to inspect the school at Kiddermaster, to the admission of a ray of light when a shutter is suddenly opened in a darkened room. All-in-all, he valued happy-appearing children, and kindly sympathetic teachers, more than excellence in grade reports. In connection with the duties of his office as commissioner, he travelled frequently on the Continent to inquire into foreign methods of primary and secondary education. Here he found much that was worth while, and often carried back to London larger suggestions and ideas than the national mind was ready to accept. Under his supervision, however, the school system of England was extensively revised and improved. He resigned his position under the Committee of Council on Education, in 1886, two years before his death....