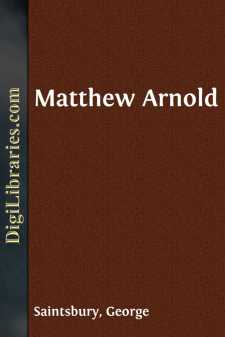 Chapter I. Life till Marriage, and Work till the Publication of the Poems of 1853.

Even those who are by no means greedy of details as to the biography of authors, may without inconsistency regret that Matthew Arnold’s Letters do not begin till he was just five-and-twenty. And then they are not copious, telling us in particular next to nothing about his literary work (which is, later, their constant subject) till he was past thirty. We could spare schoolboy letters, which, though often interesting, are pretty identical, save when written by little prigs. But the letters of an undergraduate—especially when the person is Matthew Arnold, and the University the Oxford of the years 1841-45—ought to be not a little symptomatic, not a little illuminative. We might have learnt from them something more than we know at present about the genesis and early stages of that not entirely comprehensible or classifiable form of Liberalism in matters political, ecclesiastical, and general which, with a kind of altered Voltairian touch, attended his Conservatism in literature. Moreover, it is a real loss that we have scarcely anything from his own pen about his poems before Sohrab and Rustum—that is to say, about the great majority of the best of them. By the time at which we have full and frequent commentaries on himself, he is a married man, a harnessed and hard-working inspector of schools, feeling himself too busy for poetry, not as yet tempted by promptings within or invitations from without to betake himself to critical prose in any quantity or variety. Indeed, by a not much more than allowable hyperbole, we may say that we start with the book of his poetry all but shut, and the book of his prose all but unopened.

We must therefore make what we can of the subject, and of course a great deal more is to be made in such a case of the work than of the life. The facts of the latter are but scanty. Matthew Arnold, as all the world knows, was the son—the eldest son—of the famous Dr (Thomas) Arnold, Head-master of Rugby, and Regius Professor of Modern History at Oxford, where he had earlier been a Fellow of Oriel. Dr Arnold survives in the general memory now chiefly by virtue of his head-mastership, which was really a remarkable one, whatever distinction it may owe to the loyalty of such a group of pupils as his son, Dean Stanley, Clough, “Tom Brown” Hughes, and others. But he was, if not positively great, a notable and influential person in many ways. As a historian he was alert and intelligent, though perhaps too much under the influence of that subtlest and most dangerous kind of “popular breeze” which persuades those on whom it blows that they are sailing not with but away from the vulgar. As a scholar he was ingenious, if not very erudite or deep. He was really a master, and has been thought by some good judges a great master, of that admirable late Georgian academic style of English prose, which is almost the equal of the greatest. But he was, if not exactly cupidus novarum rerum in Church and State, very ready to entertain them; he was curiously deficient in logic; and though the religious sense was strong in him, he held, and transmitted to his son, the heresy—the foundation of all heresies—that religion is something that you can “bespeak,” that you can select and arrange to your own taste; that it is not “to take or to leave” at your peril and as it offers itself....