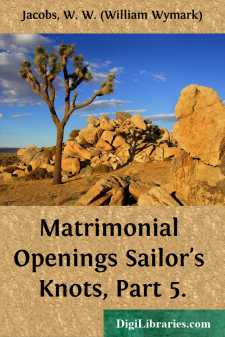 Mr. Dowson sat by the kitchen fire smoking and turning a docile and well- trained ear to the heated words which fell from his wife's lips.

"She'll go and do the same as her sister Jenny done," said Mrs. Dowson, with a side glance at her daughter Flora; "marry a man and then 'ave to work and slave herself to skin and bone to keep him."

"I see Jenny yesterday," said her husband, nodding. "Getting quite fat, she is."

"That's right," said Mrs. Dowson, violently, "that's right! The moment I say something you go and try and upset it."

"Anybody who didn't know you, Joe Dowson," said his wife, fiercely, "would think you was doing it a purpose."

"Doing wot?" inquired Mr. Dowson, removing his pipe and regarding her open-mouthed. "I only said——"

"I know what you said," retorted his wife. "Here I do my best from morning to night to make everybody 'appy and comfortable; and what happens?"

"Nothing," said the sympathetic Mr. Dowson, shaking his head. "Nothing."

"That's right, mother," said the innocent Mr. Dowson, "look on the bright side o' things a bit. If Jenny 'ad married a better chap I don't suppose we should see half as much of her as wot we do."

"I'm talking of Flora," said his wife, restraining herself by an effort. "One unfortunate marriage in the family is enough; and here, instead o' walking out with young Ben Lippet, who'll be 'is own master when his father dies, she's gadding about with that good-for-nothing Charlie Foss."

Mr. Dowson shook his head. "He's so good-looking, is Charlie," he said, slowly; "that's the worst of it. Wot with 'is dark eyes and his curly 'air——"

Mr. Dowson, dimly conscious that something was wrong, stopped and puffed hard at his pipe. Through the cover of the smoke he bestowed a sympathetic wink upon his daughter.

"You needn't go on too fast," said the latter, turning to her mother. "I haven't made up my mind yet. Charlie's looks are all right, but he ain't over and above steady, and Ben is steady, but he ain't much to look at."

"What does your 'art say?" inquired the sentimental Mr. Dowson.

Neither lady took the slightest notice.

"Charlie Foss is too larky," said Mrs. Dowson, solemnly; "it's easy come and easy go with 'im. He's just such another as your father's cousin Bill—and look what 'appened to him!"

Miss Dowson shrugged her shoulders and subsiding in her chair, went on with her book, until a loud knock at the door and a cheerful, but peculiarly shrill, whistle sounded outside.

"There is my lord," exclaimed Mrs. Dowson, waspishly; "anybody might think the 'ouse belonged to him. And now he's dancing on my clean doorstep."

"Might be only knocking the mud off afore coming in," said Mr. Dowson, as he rose to open the door. "I've noticed he's very careful."