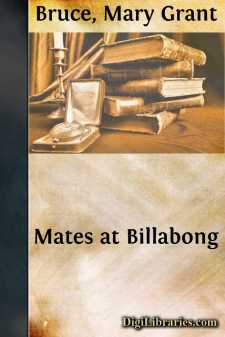 The grey old dwelling, rambling and wide,With the homestead paddocks on either side,And the deep verandahs and porches tallWhere the vine climbs high on the trellised wall.G. ESSEX EVANS.

Billabong homestead lay calm and peaceful in the slanting rays of the sum that crept down the western sky. The red roofs were half hidden in the surrounding trees—pine and box and mighty blue gums towering above the tenderer green of the orchard, and the wide-flung tendrils of the Virginia creeper that was pushing slender fingers over the old walls. If you came nearer, you found how the garden rioted in colour under the touch of early summer, from the crimson rambler round the eastern bay window to the "Bonfire" salvia blazing in masses on the lawn; but from the paddocks all that could be seen was the mass of green, and the mellow red of the roof glimpsing through. Further back came a glance of rippled silver, where the breeze caught the surface of the lagoon—too lazy a breeze to do more than faintly stir the reed-fringed water. Towards it a flight of black swans winged slowly, with outstretched necks, across a sky of perfect blue. Their leader's note floated down, as if in answer to the magpies that carolled in the pine trees by the stables. The sound seemed to hang in the still air.

Beyond the tennis-court, in the farther recesses of the garden, a hammock swung between two grevillea trees, whose orange flowers made a gay canopy overhead; and in the hammock Norah swayed gently, and knitted, and pondered. The shining needles flashed in and out of the dark blue silk sock. Outsiders—mothers of prim daughters, whom Norah pictured as finding their wildest excitement in "patting a doll"—were wont to deplore that the only daughter of David Linton of Billabong was brought up in an eccentric fashion, less girl than boy; but outsiders are apt to cherish delusions, and Norah was not without her share of gentle accomplishments. Knitting was one; the sock grew quickly in the capable brown fingers that could grip a stock-whip as easily as they handled the needles. All the while, she was listening.

About her the coo of invisible doves fell gently, mingling with the happy droning of bees in the overhead blossoms. Somewhere, not far off, a sheep bell tinkled monotonously, the only outside sound in the afternoon stillness. It was very peaceful. To Norah, who knew that the world held no place like Billabong, it only lacked one person for the final seal of perfection.

"Wish Dad would come," she said aloud, puckering her brow over a knot in the silk. "He's late—and it is jolly dull without him." The knot came free, and the needles raced as though making up for lost time.

Two dogs lay on the grass: a big sleepy collie that only moved occasionally to snap at a worrying fly; and an Irish terrier, plainly showing by his restlessness that he despised a lazy life, and longed for action. He caught his mistress's eye at last, and jumped up with a little whine.