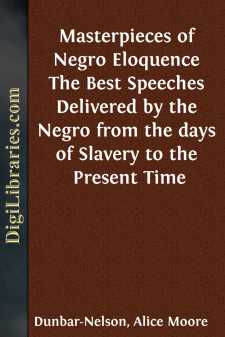 It seems eminently fitting and proper in this year, the fiftieth anniversary of the Proclamation of Emancipation that the Negro should give pause and look around him at the things which he has done, those which he might have done, and those which he intends to do. We pause, just at the beginning of another half century, taking stock of past achievements, present conditions, future possibilities.

In considering the literary work of the Negro, his pre-eminence in the field of oratory is striking. Since the early nineteenth century until the present time, he is found giving eloquent voice to the story of his wrongs and his proscriptions. Crude though the earlier efforts may be, there is a certain grim eloquence in them that is touching, there must be, because of the intensity of feeling behind the words.

Therefore, it seems appropriate in putting forth a volume commemorating the birth of the Negro into manhood, to collect some few of the speeches he made to help win his manhood, his place in the economy of the nation, his right to stand with his face to the sun. The present volume does not aim to be a complete collection of Negro Eloquence; it does not even aim to present the best that the Negro has done on the platform, it merely aims to present to the public some few of the best speeches made within the past hundred years. Much of the best is lost; much of it is hidden away in forgotten places. We have not always appreciated our own work sufficiently to preserve it, and thus much valuable material is wasted. Sometimes it has been difficult to obtain good speeches from those who are living because of their innate modesty, either in not desiring to appear in print, or in having thought so little of their efforts as to have lost them.

The Editor is conscious that many names not in the table of contents will suggest themselves to the most casual reader, but the omissions are not intentional nor yet of ignorance always, but due to the difficulty of procuring the matter in time for the publication of the volume before the golden year shall have closed.

In collecting and arranging the matter, for the volume, I am deeply indebted first to the living contributors who were so gracious and generous in their responses to the request for their help, and to the relatives of those who have passed into silence, for the loan of valuable books and manuscripts. I cannot adequately express my gratitude to Mr. John E. Bruce and Mr. Arthur A. Schomburg, President and Secretary of the Negro Society for Historical Research, for advice, suggestion, and best of all, for help in lending priceless books and manuscripts and for aid in copying therefrom.

Again, we repeat, this volume is not a complete anthology; not the final word in Negro eloquence of to-day, nor yet a collection of all the best; it is merely a suggestion, a guide-post, pointing the way to a fuller work, a slight memorial of the birth-year of the race.

THE PEOPLE OF HAYTI AND A PLAN OF EMIGRATION

At a period so momentous as the present, when the friends of abolition and emancipation, as well as those whom observation and experience might teach us to beware to whom we should apply the endearing appellations, are professedly concerned for the establishment of an Asylum for those Free Persons of Color, who may be disposed to remove to it, and for such persons as shall hereafter be emancipated from slavery, a careful examination of this subject is imposed upon us.

So large a number of abolitionists, convened from different sections of the country, is at all times and under any circumstances, an interesting spectacle to the eye of the philanthropist, how doubly delightful then is it, to me, whose interests and feelings so largely partake in the object you have in view, to behold this convention engaged in solemn deliberation upon those subjects employed to promote the improvement of the condition of the African race.

Assembled as this convention is, for the promotion and extension of its beneficent and humane views and principles, I would respectfully beg leave to lay before it a few remarks upon the character, condition, and wants of the afflicted and divided people of Hayti, as they, and that island, may be connected with plans for the emigration of the free people of color of the United States.

God in the mysterious operation of his providence has seen fit to permit the most astonishing changes to transpire upon that naturally beautiful and (as to soil and productions) astonishingly luxuriant island.

The abominable principles, both of action and belief, which pervaded France during the long series of vicissitudes which until recently she has experienced, extended to Hayti, or Santo Domingo have undoubtedly had an extensive influence upon the character, sentiments, and feelings of all descriptions of its present inhabitants.

This magnificent and extensive island which has by travellers and historians been often denominated the "paradise of the New World," seems from its situation, extent, climate, and fertility peculiarly suited to become an object of interest and attention to the many distinguished and enlightened philanthropists whom God has been graciously pleased to inspire with a zeal for the promotion of the best interests of the descendants of Africa. The recent proceedings in several of the slave States toward the free population of color in those States seem to render it highly probable that that oppressed class of the community will soon be obliged to flee to the free States for protection. If the two rival Governments of Hayti were consolidated into one well-balanced pacific power, there are many hundred of the free people in the New England and Middle States who would be glad to repair there immediately to settle, and believing that the period has arrived, when many zealous friends to abolition and emancipation are of opinion that it is time for them to act in relation to an asylum for such persons as shall be emancipated from slavery, or for such portion of the free colored population at present existing in the United States, as shall feel disposed to emigrate, and being aware that the authorities of Hayti are themselves desirous of receiving emigrants from this country, are among the considerations which have induced me to lay this subject before the convention....