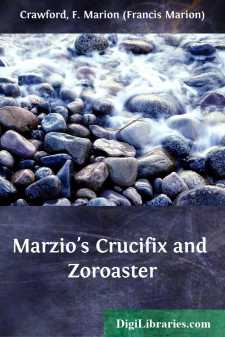 "The whole of this modern fabric of existence is a living lie!" cried Marzio Pandolfi, striking his little hammer upon the heavy table with an impatient rap. Then he dropped it and turning on his stool rested one elbow upon the board while he clasped his long, nervous fingers together and stared hard at his handsome apprentice. Gianbattista Bordogni looked up from his work without relinquishing his tools, nodded gravely, stared up at the high window, and then went on hammering gently upon his little chisel, guiding the point carefully among the delicate arabesques traced upon the silver.

"Yes," he said quietly, after a few seconds, "it is all a lie. But what do you expect, Maestro Marzio? You might as well talk to a stone wall as preach liberty to these cowards."

"Nevertheless, there are some—there are half a dozen—" muttered Marzio, relapsing into sullen discontent and slowly turning the body of the chalice beneath the cord stretched by the pedal on which he pressed his foot. Having brought under his hand a round boss which was to become the head of a cherub under his chisel, he rubbed his fingers over the smooth silver, mechanically, while he contemplated the red wax model before him. Then there was silence for a space, broken only by the quick, irregular striking of the two little hammers upon the heads of the chisels.

Maestro Marzio Pandolfi was a skilled workman and an artist. He was one of the last of those workers in metals who once sent their masterpieces from Rome to the great cathedrals of the world; one of the last of the artistic descendants of Caradosso, of Benvenuto Cellini, of Claude Ballin, and of all their successors; one of those men of rare talent who unite the imagination of the artist with the executive skill of the practised workman. They are hard to find nowadays. Of all the twenty chisellers of various ages who hammered from morning till night in the rooms outside, one only—Gianbattista Bordogni—had been thought worthy by his master to share the privacy of the inner studio. The lad had talent, said Maestro Marzio, and, what was more, the lad had ideas—ideas about life, about the future of Italy, about the future of the world's society. Marzio found in him a pupil, an artist and a follower of his own political creed.

It was a small room in which they worked together. Plain wooden shelves lined two of the walls from the floor to the ceiling. The third was occupied by tables and a door, and in the fourth high grated windows were situated, from which the clear light fell upon the long bench before which the two men sat upon high stools. Upon the shelves were numerous models in red wax, of chalices, monstrances, marvellous ewers and embossed basins for the ablution of the priests' hands, crucifixes, crowns, palm and olive branches—in a word, models of all those things which pertain to the service and decoration of the church, and upon which it has been the privilege of the silversmith to expend his art and labour from time immemorial until the present day....