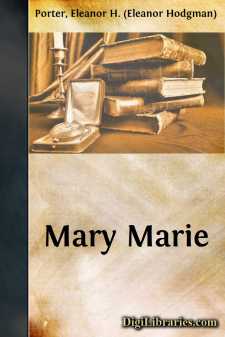 CHAPTER I I AM BORN

The sun was slowly setting in the west, casting golden beams of light into the somber old room.

That's the way it ought to begin, I know, and I'd like to do it, but I can't. I'm beginning with my being born, of course, and Nurse Sarah says the sun wasn't shining at all. It was night and the stars were out. She remembers particularly about the stars, for Father was in the observatory, and couldn't be disturbed. (We never disturb Father when he's there, you know.) And so he didn't even know he had a daughter until the next morning when he came out to breakfast. And he was late to that, for he stopped to write down something he had found out about one of the consternations in the night.

He's always finding out something about those old stars just when we want him to pay attention to something else. And, oh, I forgot to say that I know it is "constellation," and not "consternation." But I used to call them that when I was a little girl, and Mother said it was a good name for them, anyway, for they were a consternation to her all right. Oh, she said right off afterward that she didn't mean that, and that I must forget she said it. Mother's always saying that about things she says.

Well, as I was saying, Father didn't know until after breakfast that he had a little daughter. (We never tell him disturbing, exciting things just before meals.) And then Nurse told him.

I asked what he said, and Nurse laughed and gave her funny little shrug to her shoulders.

"Yes, what did he say, indeed?" she retorted. "He frowned, looked kind of dazed, then muttered: 'Well, well, upon my soul! Yes, to be sure!'"

Then he came in to see me.

I don't know, of course, what he thought of me, but I guess he didn't think much of me, from what Nurse said. Of course I was very, very small, and I never yet saw a little bit of a baby that was pretty, or looked as if it was much account. So maybe you couldn't really blame him.

Nurse said he looked at me, muttered, "Well, well, upon my soul!" again, and seemed really quite interested till they started to put me in his arms. Then he threw up both hands, backed off, and cried, "Oh, no, no!" He turned to Mother and hoped she was feeling pretty well, then he got out of the room just as quick as he could. And Nurse said that was the end of it, so far as paying any more attention to me was concerned for quite a while.

He was much more interested in his new star than he was in his new daughter. We were both born the same night, you see, and that star was lots more consequence than I was. But, then, that's Father all over. And that's one of the things, I think, that bothers Mother. I heard her say once to Father that she didn't see why, when there were so many, many stars, a paltry one or two more need to be made such a fuss about. And I don't, either.

But Father just groaned, and shook his head, and threw up his hands, and looked so tired. And that's all he said. That's all he says lots of times. But it's enough. It's enough to make you feel so small and mean and insignificant as if you were just a little green worm crawling on the ground....