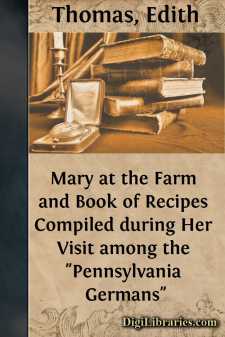 One morning in early spring, John Landis, a Pennsylvania German farmer living in Schuggenhaus Township, Bucks County, on opening his mail box, fastened to a tree at the crossroads (for the convenience of rural mail carriers) found one letter for his wife Sarah, the envelope addressed in the well-known handwriting of her favorite niece, Mary Midleton, of Philadelphia.

A letter being quite an event at "Clear Spring" farm, he hastened with it to the house, finding "Aunt Sarah," as she was called by every one (Great Aunt to Mary), in the cheery farm house kitchen busily engaged kneading sponge for a loaf of rye bread, which she carefully deposited on a well-floured linen cloth, in a large bowl for the final raising.

Carefully adjusting her glasses more securely over the bridge of her nose, she turned at the sound of her husband's footsteps. Seeing the letter in his hand she inquired: "What news, John?" Quickly opening the letter handed her, she, after a hasty perusal, gave one of the whimsical smiles peculiar to her and remarked decisively, with a characteristic nod of her head: "John, Mary Midleton intends to marry, else why, pray tell me, would she write of giving up teaching her kindergarten class in the city, to spend the summer with us on the farm learning, she writes, to keep house, cook, economize and to learn how to get the most joy and profit from life?"

"Well, well! Mary is a dear girl, why should she not think of marrying?" replied her husband; "she is nineteen. Quite time, I think, she should learn housekeeping—something every young girl should know. We should hear of fewer divorces and a less number of failures of men in business, had their wives been trained before marriage to be good, thrifty, economical housekeepers and, still more important, good homemakers. To be a helpmate in every sense of the word is every woman's duty, I think, when her husband works early and late to procure the means to provide for her comforts and luxuries and a competency for old age. Write Mary to come at once, and under your teaching she may, in time, become as capable a housekeeper and as good a cook as her Aunt Sarah; and, to my way of thinking, there is none better, my dear."

Praise from her usually reticent husband never failed to deepen the tint of pink on Aunt Sarah's still smooth, unwrinkled, youthful looking face, made more charming by being framed in waves of silvery gray hair, on which the "Hand of Time," in passing, had sprinkled some of the dust from the road of life.

In size, Sarah Landis was a little below medium height, rather stout, or should I say comfortable, and matronly looking; very erect for a woman of her age. Her bright, expressive, gray eyes twinkled humorously when she talked. She had developed a fine character by her years of unselfish devotion to family and friends. Her splendid sense of humor helped her to overcome difficulties, and her ability to rise above her environment, however discouraging their conditions, prevented her from being unhappy or depressed by the small annoyances met daily....