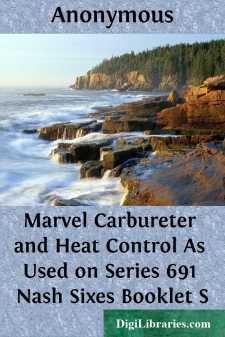 The carbureter measures the fuel charges for the engine and automatically mixes them with the proper amount of air to form a highly combustible gas. The Marvel Model "S" Carbureter is of the automatic air valve, heat controlled type. Its outstanding advantages are:

1. Simplicity of construction and operation.

2. Quick starting in any weather.

5. Ease of adjustment to meet varied driving and climatic conditions.

The construction embodies a main body or mixing chamber and a conventional float chamber bowl with fuel strainer attached at point of entrance of fuel to bowl. Within the mixing chamber are two nozzles which proportion the amount of gasoline used in the mixture. One of these nozzles, called the "low speed," is regulated by the gasoline adjustment screw at bottom of carbureter and the other, called the "high speed," is controlled by the automatic air valve. An air screw is provided which regulates the pressure of the air valve spring enclosed therein. Within this screw is also enclosed a plunger connected by a link to the air valve. The function of this plunger is to provide a resistance in addition to that of the air valve spring to assist in acceleration. This arrangement of plunger and air valve screw is termed the dash pot.

A further control of the high speed jet is provided by the fuel metering valve operated by the carbureter throttle. This valve provides the maximum fuel feed to the "high speed" nozzle when the throttle is fully opened for high speeds and for quick "pick up." During the ordinary driving ranges this valve controls the amount of fuel being used, thus providing all the economy possible. This valve is entirely automatic and requires no adjustment.

The passage-way from the mixing chamber to the intake manifold is controlled by a butterfly valve which is called the throttle-valve and is connected to the throttle-lever on the steering wheel as well as to the foot accelerator, its position determining the amount of gas and air or mixture being fed the engine.

A choke button is provided on the instrument board to assist in starting. Pulling out this button closes a butterfly choker valve (see cut) in the air intake passage of carbureter which restricts the air opening of the carbureter, and consequently produces a richer mixture.

To start engine, pull out choke button all the way. Advance spark lever about half way and throttle lever about one-quarter way and depress starter pedal.

As soon as motor fires when starting, this control should be released part way, otherwise too much fuel will be drawn from carbureter, causing flooding of the motor and failure of the latter to continue to promptly fire. After starting, motor should be allowed to run "part choke" as stated for a few minutes while warming up, then the choker control should be fully released, or pushed in completely on the instrument board, and engine allowed to run normally for sometime until water in cylinder jackets is thoroughly warmed up before starting to make final carbureter adjustments.

In the colder seasons warm air is fed to air intake of carbureter through the warm air elbow "F" (see cut)....