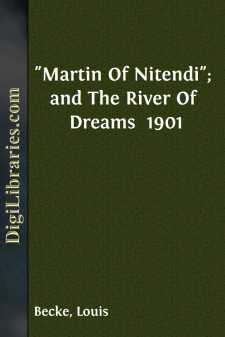 Half-way up the side of the mountain which overlooked the waters of the little land-locked harbour there was a space clear of timber. Huge, jagged rocks, whose surfaces were covered with creepers and grey moss, protruded from the soil, and on the highest of these a man was lying at full length, looking at the gunboat anchored half a mile away. He was clothed in a girdle of ti leaves only; his feet were bare, cut, and bleeding; round his waist was strapped a leather belt with an empty cartridge pouch; his brawny right hand grasped a Snider rifle; his head-covering was a roughly made cap of coconut-nut leaf, with a projecting peak, designed to shield his blood-shot, savage eyes from the sun. Yet he had been a White Man. For nearly an hour he had been watching, ever since the dawn had broken. Far below him, thin, wavering curls of pale blue smoke were arising from the site of the native village, fired by the bluejackets on the previous evening. The ruins of his own house he could discern by the low stone wall surrounding it; as for the native huts which, the day before, had clustered so thickly around his own dwelling, there was now no trace save heaps of grey ashes.

A boat put off from the ship, and as the yellow-bladed oars flashed in the sunlight the man drew his rifle close up to his side and his eyes gleamed with a deadly hatred.

"Officers' shootin' party," he muttered, as he watched the boat ground on the beach and three men, carrying guns, step out and walk up the beach—"officer's shootin' party. Christ A'mighty! I'd like to pot every one o' the swine. An' I could do it, too, I could do it. But wot's the use o' bein' a blarsted fool for nothin'?"

The boat's crew got out and walked about the smouldering remains of the village, seeking for curios which had escaped the fire, pausing awhile to look at a large mound of sand, under which lay seven of the natives killed by the landing-party on the preceding day. Then, satisfied that there was nothing to be had, the coxswain grumblingly ordered the men back to the boat, which pushed off and returned to the ship.

The wild, naked creature lying upon the boulder saw the boat pull off with a sigh of satisfaction. There was, under the ashes of his house, and buried still further under the soil, a 50-lb. beef barrel filled with Chilian and Mexican dollars. And he had feared that the bluejackets might rake about the ashes and find it.

He rose and stepped down the jagged boulder to where, at the base, the thick carpet of dead leaves, fallen from the giant trees which encompassed it, silenced even the tread of his naked feet. Seated against the bole of a many-buttressed vi-tree was a native woman, whose right arm, shattered by a bullet and bound up in the spathe of a coconut-palm, was suspended from her neck by a strip of soft bark. She looked at him inquiringly.

"A boat has come ashore," he said in the native tongue, "but none of the white men are seeking for my money."

"Thy money!" The woman's eyes blazed with a deadly fury....