Marmaduke Merry A Tale of Naval Adventures in Bygone Days 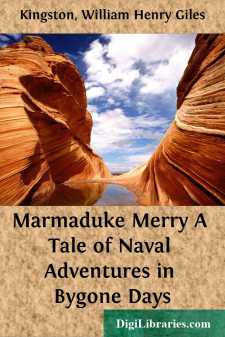 I belong to the family of the Merrys of Leicestershire. Our chief characteristic was well suited to our patronymic. “Merry by name and merry by nature,” was a common saying among us. Indeed, a more good-natured, laughing, happy set of people it would be difficult to find. Right jovial was the rattle of tongues and the cachinnation which went forward whenever we were assembled together either at breakfast or dinner or supper; our father and mother setting us the example, so that we began the day with a hearty laugh, and finished it with a heartier. “Laugh and grow fat” is an apothegm which all people cannot follow, but our mother did in the most satisfactory manner. Her skin was fair and most thoroughly comfortably filled out; her hair was light, and her contented spirit beamed out from a pair of large laughing blue eyes, so that it was a pleasure to look at her as she sat at the head of the table, serving out the viands to her hungry progeny. Our sisters were very like her, and came fairly under the denomination of jolly girls; and thoroughly jolly they were;—none of them ever had a headache or a toothache, or any other ache that I know of. Our father was a good specimen of a thorough English country gentleman; he was thorough in everything, honest-faced, stout, and hearty, not over-refined, perhaps, but yet gentle in all his thoughts and acts; a hater of a lie and every thing dishonourable, hospitable and generous to the utmost of his means; a protector of the poor and helpless, and a friend to all his neighbours. Yes, and I may say more, both he and my mother were humble, sincere Christians, and made the law of the Bible their rule of life. He told a good story and laughed at it himself, and delighted to see our mother and us laugh at it also. Had he been bred a lawyer, and lived in London, he would have been looked upon as a first-rate wit; but I am certain that he was much happier with the lot awarded to him. He had a good estate; his tenants paid their rents regularly; and he had few or no cares to disturb his digestion or to keep him awake at night; and I am very certain that he would far rather have had us to hear his jokes, and laugh at them with him, than all the wits London ever produced. He delighted in joining in all our sports, either of the field or flood, and we always looked forward to certain amusement when he was able to accompany us. He was our companion and friend; we had no secrets from him,—why should we? He was always our best adviser, and if we got into scrapes, which one or the other of us was not unfrequently doing, we were very certain that no one could extricate us as well as he could. I don’t mean to say that he forgot the proverb, “Spare the rod, spoil the child;” or that we were such pieces of perfection that we did not deserve punishment; but we had sense enough to see that he punished us for our good: he did it calmly, never angrily, and without any unnecessarily severe remark, and we certainly did not love him the less for the sharpest flogging he ever gave us. Directly afterwards, he would meet the culprit in his usual frank, hearty way, and seem to forget all about the matter.

Our sisters were on the same happy intimate terms with our mother, and we boys had no secrets with her, or with them either.

Our father used to believe and assert that our family had settled in Leicestershire before the Conquest, and, in consequence of this notion, he gave us all old English names or what he supposed to be such. His own name was Joliffe, and he used to be called by his hunting associates, the other gentlemen of the county, Jolly Merry. He was not, I should say, par excellence a fox hunter, though he subscribed to the county hunt, and frequently followed the hounds; and no one rode better, nor did any one’s voice sound more cheerily on copse or hill side than did his, as he greeted a friend, or sang out, in the exuberance of his spirits, a loud tallyho-ho. My name stood sixth in the Family Bible, and that of Marmaduke had fallen to my lot. We had a Cedric, an Athelstane, an Egbert, and an Edwin among the boys, and a Bertha, an Edith, and a Winifred among the girls. We all went to school in our turns, but though it was a very good school, we did not like it so much as home. When, however, we got to school, we used to be very jolly, and if other boys pulled long faces we made round ones and laughed away as usual. Our school was in Northamptonshire, so that we had not far to go, and we kept up a very frequent correspondence with home, from which, in consequence of its vicinity, we received more hampers laden with cakes and tongues, and pots of jam, and similar comestible articles, than most of our companions. I do not say that we should not otherwise have been favourites, but it might have been remarked that the attentions and willingness to oblige us of our companions increased in proportion to the size of our hampers, and our readiness to dispense their contents.

However, I will not dwell on my school life. I imbibed a certain amount of classical and elementary knowledge of a somewhat miscellaneous description, and received not a few canings, generally for laughing in my class at something which tickled my fancy, when I ought not to have allowed my fancy to be tickled; but altogether my conduct was such that I believe I was considered to have brought no discredit on the Merry name or fame. Such was my uneventful career at school.

We were all at home for the summer holidays. We were seated at breakfast. What a rattle of tongues, and knives, and forks, and cups, and saucers there was going on. What vast slices of bread and butter were disappearing within our well practised jaws. Various cries proceeded from each side of the table. “Bertha, another cup of tea;” “Bertha, some more milk;” “Bertha, you haven’t given me sugar enough by half;” “Bertha, I like strong tea; no wish-wash for me.”

Bertha was our oldest sister and tea-maker general. She had no sinecure office of it; but, in spite often of the most remarkable demands, she dispensed the beverage with the most perfect justice and good humour. Not unsatisfactory were the visits paid to the sideboard, covered as it was with brawn, and ham, and tongue, and a piece of cold beef, and such like substantial fare....