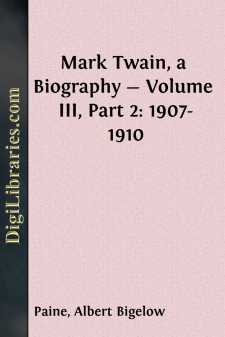 Clemens made a brief trip to Bermuda during the winter, taking Twichell along; their first return to the island since the trip when they had promised to come back so soon-nearly thirty years before. They had been comparatively young men then. They were old now, but they found the green island as fresh and full of bloom as ever. They did not find their old landlady; they could not even remember her name at first, and then Twichell recalled that it was the same as an author of certain schoolbooks in his youth, and Clemens promptly said, "Kirkham's Grammar." Kirkham was truly the name, and they went to find her; but she was dead, and the daughter, who had been a young girl in that earlier time, reigned in her stead and entertained the successors of her mother's guests. They walked and drove about the island, and it was like taking up again a long-discontinued book and reading another chapter of the same tale. It gave Mark Twain a fresh interest in Bermuda, one which he did not allow to fade again.

Later in the year (March, 1907) I also made a journey; it having been agreed that I should take a trip to the Mississippi and to the Pacific coast to see those old friends of Mark Twain's who were so rapidly passing away. John Briggs was still alive, and other Hannibal schoolmates; also Joe Goodman and Steve Gillis, and a few more of the early pioneers—all eminently worth seeing in the matter of such work as I had in hand. The billiard games would be interrupted; but whatever reluctance to the plan there may have been on that account was put aside in view of prospective benefits. Clemens, in fact, seemed to derive joy from the thought that he was commissioning a kind of personal emissary to his old comrades, and provided me with a letter of credentials.

It was a long, successful trip that I made, and it was undertaken none too soon. John Briggs, a gentle-hearted man, was already entering the valley of the shadow as he talked to me by his fire one memorable afternoon, and reviewed the pranks of those days along the river and in the cave and on Holliday's Hill. I think it was six weeks later that he died; and there were others of that scattering procession who did not reach the end of the year. Joe Goodman, still full of vigor (in 1912), journeyed with me to the green and dreamy solitudes of Jackass Hill to see Steve and Jim Gillis, and that was an unforgetable Sunday when Steve Gillis, an invalid, but with the fire still in his eyes and speech, sat up on his couch in his little cabin in that Arcadian stillness and told old tales and adventures. When I left he said:

"Tell Sam I'm going to die pretty soon, but that I love him; that I've loved him all my life, and I'll love him till I die. This is the last word I'll ever send to him." Jim Gillis, down in Sonora, was already lying at the point of death, and so for him the visit was too late, though he was able to receive a message from his ancient mining partner, and to send back a parting word.

I returned by way of New Orleans and the Mississippi River, for I wished to follow that abandoned water highway, and to visit its presiding genius, Horace Bixby,—[He died August 2, 1912, at the age of 86]—still alive and in service as pilot of the government snagboat, his headquarters at St....