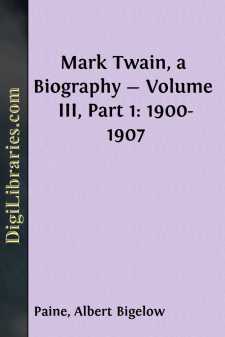 THE RETURN OF THE CONQUEROR

It would be hard to exaggerate the stir which the newspapers and the public generally made over the homecoming of Mark Twain. He had left America, staggering under heavy obligation and set out on a pilgrimage of redemption. At the moment when this Mecca, was in view a great sorrow had befallen him and, stirred a world-wide and soul-deep tide of human sympathy. Then there had followed such ovation as has seldom been conferred upon a private citizen, and now approaching old age, still in the fullness of his mental vigor, he had returned to his native soil with the prestige of these honors upon him and the vast added glory of having made his financial fight single-handed-and won.

He was heralded literally as a conquering hero. Every paper in the land had an editorial telling the story of his debts, his sorrow, and his triumphs.

Howells acknowledges that he had some doubts as to the permanency of the vast acclaim of the American public, remembering, or perhaps assuming, a national fickleness. Says Howells:

He had hitherto been more intelligently accepted or more largely imagined in Europe, and I suppose it was my sense of this that inspired the stupidity of my saying to him when we came to consider "the state of polite learning" among us, "You mustn't expect people to keep it up here as they do in England." But it appeared that his countrymen were only wanting the chance, and they kept it up in honor of him past all precedent.

Clemens went to the Earlington Hotel and began search for a furnished house in New York. They would not return to Hartford—at least not yet. The associations there were still too sad, and they immediately became more so. Five days after Mark Twain's return to America, his old friend and co-worker, Charles Dudley Warner, died. Clemens went to Hartford to act as a pall-bearer and while there looked into the old home. To Sylvester Baxter, of Boston, who had been present, he wrote a few days later:

It was a great pleasure to me to renew the other days with you, & there was a pathetic pleasure in seeing Hartford & the house again; but I realized that if we ever enter the house again to live our hearts will break. I am not sure that we shall ever be strong enough to endure that strain.

Even if the surroundings had been less sorrowful it is not likely that Clemens would have returned to Hartford at this time. He had become a world-character, a dweller in capitals. Everywhere he moved a world revolved about him. Such a figure in Germany would live naturally in Berlin; in England London; in France, Paris; in Austria, Vienna; in America his headquarters could only be New York.

Clemens empowered certain of his friends to find a home for him, and Mr. Frank N. Doubleday discovered an attractive and handsomely furnished residence at 14 West Tenth Street, which was promptly approved....