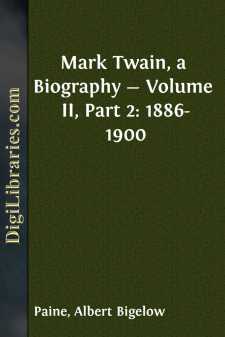 The Browning readings must have begun about this time. Just what kindled Mark Twain's interest in the poetry of Robert Browning is not remembered, but very likely his earlier associations with the poet had something to do with it. Whatever the beginning, we find him, during the winter of 1886 and 1887, studiously, even violently, interested in Browning's verses, entertaining a sort of club or class who gathered to hear his rich, sympathetic, and luminous reading of the Payleyings—"With Bernard de Mandeville," "Daniel Bartoli," or "Christopher Smart." Members of the Saturday Morning Club were among his listeners and others-friends of the family. They were rather remarkable gatherings, and no one of that group but always vividly remembered the marvelously clear insight which Mark Twain's vocal personality gave to those somewhat obscure measures. They did not all of them realize that before reading a poem he studied it line by line, even word by word; dug out its last syllable of meaning, so far as lay within human possibility, and indicated with pencil every shade of emphasis which would help to reveal the poet's purpose. No student of Browning ever more devoutly persisted in trying to compass a master's intent—in such poems as "Sordello," for instance—than Mark Twain. Just what permanent benefit he received from this particular passion it is difficult to know. Once, at a class-meeting, after finishing "Easter Day," he made a remark which the class requested him to "write down." It is recorded on the fly-leaf of Dramatis Personae as follows:

One's glimpses & confusions, as one reads Browning, remind me of looking through a telescope (the small sort which you must move with your hand, not clock-work). You toil across dark spaces which are (to your lens) empty; but every now & then a splendor of stars & suns bursts upon you and fills the whole field with flame. Feb. 23, 1887.

In another note he speaks of the "vague dim flash of splendid hamming-birds through a fog." Whatever mental treasures he may or may not have laid up from Browning there was assuredly a deep gratification in the discovery of those splendors of "stars and suns" and the flashing "humming-birds," as there must also have been in pointing out those wonders to the little circle of devout listeners. It all seemed so worth while.

It was at a time when George Meredith was a reigning literary favorite. There was a Meredith cult as distinct as that of Browning. Possibly it exists to-day, but, if so, it is less militant. Mrs. Clemens and her associates were caught in the Meredith movement and read Diana of the Crossways and the Egoist with reverential appreciation.

The Meredith epidemic did not touch Mark Twain. He read but few novels at most, and, skilful as was the artistry of the English favorite, he found his characters artificialities—ingeniously contrived puppets rather than human beings, and, on the whole, overrated by their creator. Diana of the Crossways was read aloud, and, listening now and then, he was likely to say:

"It doesn't seem to me that Diana lives up to her reputation. The author keeps telling us how smart she is, how brilliant, but I never seem to hear her say anything smart or brilliant. Read me some of Diana's smart utterances."

He was relentless enough in his criticism of a literature he did not care for, and he never learned to care for Meredith.

He read his favorite books over and over with an ever-changing point of view. He re-read Carlyle's French Revolution during the summer at the farm, and to Howells he wrote:

How stunning are the changes which age makes in man while he sleeps! When I finished Carlyle's French Revolution in 1871 I was a Girondin; every time I have read it since I have read it differently—being influenced & changed, little by little, by life & environment (& Taine & St. Simon); & now I lay the book down once more, & recognize that I am a Sansculotte!—And not a pale, characterless Sansculotte, but a Marat. Carlyle teaches no such gospel, so the change is in me—in my vision of the evidences.

People pretend that the Bible means the same to them at 50 that it did at all former milestones in their journey. I wonder how they can lie so. It comes of practice, no doubt. They would not say that of Dickens's or Scott's books. Nothing remains the same. When a man goes back to look at the house of his childhood it has always shrunk; there is no instance of such house being as big as the picture in memory & imagination call for. Shrunk how? Why, to its correct dimensions; the house hasn't altered; this is the first time it has been in focus....