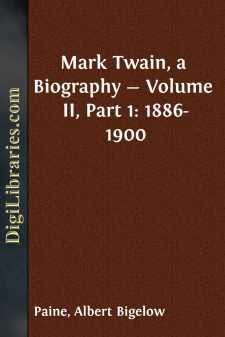 In conversation with John Hay, Hay said to Clemens:

"A man reaches the zenith at forty, the top of the hill. From that time forward he begins to descend. If you have any great undertaking ahead, begin it now. You will never be so capable again."

Of course this was only a theory of Hay's, a rule where rules do not apply, where in the end the problem resolves itself into a question of individualities. John Hay did as great work after forty as ever before, so did Mark Twain, and both of them gained in intellectual strength and public honor to the very end.

Yet it must have seemed to many who knew him, and to himself, like enough, that Mark Twain at forty had reached the pinnacle of his fame and achievement. His name was on every lip; in whatever environment observation and argument were likely to be pointed with some saying or anecdote attributed, rightly or otherwise, to Mark Twain. "As Mark Twain says," or, "You know that story of Mark Twain's," were universal and daily commonplaces. It was dazzling, towering fame, not of the best or most enduring kind as yet, but holding somewhere within it the structure of immortality.

He was in a constant state of siege, besought by all varieties and conditions of humanity for favors such as only human need and abnormal ingenuity can invent. His ever-increasing mail presented a marvelous exhibition of the human species on undress parade. True, there were hundreds of appreciative tributes from readers who spoke only out of a heart's gratitude; but there were nearly as great a number who came with a compliment, and added a petition, or a demand, or a suggestion, usually unwarranted, often impertinent. Politicians, public speakers, aspiring writers, actors, elocutionists, singers, inventors (most of them he had never seen or heard of) cheerfully asked him for a recommendation as to their abilities and projects.

Young men wrote requesting verses or sentiments to be inscribed in young ladies' autograph albums; young girls wrote asking him to write the story of his life, to be used as a school composition; men starting obscure papers coolly invited him to lend them his name as editor, assuring him that he would be put to no trouble, and that it would help advertise his books; a fruitful humorist wrote that he had invented some five thousand puns, and invited Mark Twain to father this terrific progeny in book form for a share of the returns. But the list is endless. He said once:

"The symbol of the race ought to be a human being carrying an ax, for every human being has one concealed about him somewhere, and is always seeking the opportunity to grind it."

Even P. T. Barnum had an ax, the large ax of advertising, and he was perpetually trying to grind it on Mark Twain's reputation; in other words, trying to get him to write something that would help to popularize "The Greatest Show on Earth."

There were a good many curious letters-letters from humorists, would-be and genuine. A bright man in Duluth sent him an old Allen "pepper-box" revolver with the statement that it had been found among a pile of bones under a tree, from the limb of which was suspended a lasso and a buffalo skull; this as evidence that the weapon was the genuine Allen which Bemis had lost on that memorable Overland buffalo-hunt....