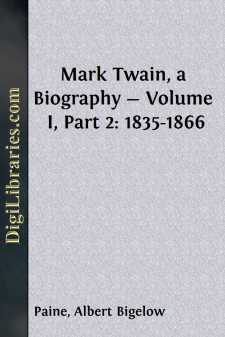 It was not easy to take up the daily struggle again, but it was necessary.—[Clemens once declared he had been so blue at this period that one morning he put a loaded pistol to his head, but found he lacked courage to pull the trigger.]—Out of the ruck of possibilities (his brain always thronged with plans) he constructed three or four resolves. The chief of these was the trip around the world; but that lay months ahead, and in the mean time ways and means must be provided. Another intention was to finish the Hornet article, and forward it to Harper's Magazine—a purpose carried immediately into effect. To his delight the article found acceptance, and he looked forward to the day of its publication as the beginning of a real career. He intended to follow it up with a series on the islands, which in due time might result in a book and an income. He had gone so far as to experiment with a dedication for the book—an inscription to his mother, modified later for use in 'The Innocents Abroad'. A third plan of action was to take advantage of the popularity of the Hawaiian letters, and deliver a lecture on the same subject. But this was a fearsome prospect—he trembled when he thought of it. As Governor of the Third House he had been extravagantly received and applauded, but in that case the position of public entertainer had been thrust upon him. To come forward now, offering himself in the same capacity, was a different matter. He believed he could entertain, but he lacked the courage to declare himself; besides, it meant a risk of his slender capital. He confided his situation to Col. John McComb, of the Alta California, and was startled by McComb's vigorous endorsement.

"Do it, by all means!" urged McComb. "It will be a grand success—I know it! Take the largest house in town, and charge a dollar a ticket."

Frightened but resolute, he went to the leading theater manager the same Tom Maguire of his verses—and was offered the new opera-house at half rates. The next day this advertisement appeared:

In which passing mention will be made of Harris, Bishop Staley, theAmerican missionaries, etc., and the absurd customs and characteristics  of the natives duly discussed and described. The great volcano of         Kilauea will also receive proper attention.